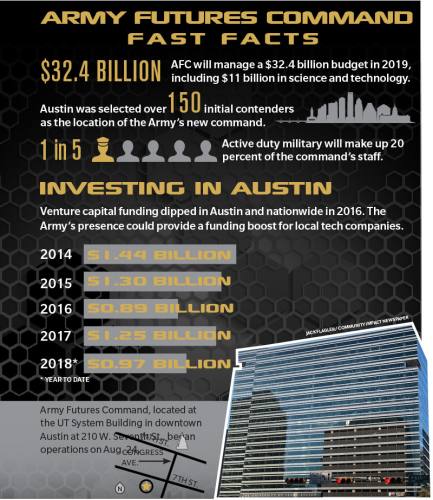 When Sputnik ATX selects a company to mentor and train, that startup receives a $100,000 investment, space in the accelerator program’s downtown coworking space and a kitchen stocked with instant Ramen noodles.

Malysheva and co-founder Joe Merrill started Sputnik ATX in October. They look for innovators who need experience to grow—companies who may have just a few employees surviving on instant Ramen noodles.

For a company like this looking for institutional support, the U.S. military’s arrival in Austin is a welcome opportunity.

On Aug. 24 the Army Futures Command officially began operations in Austin at the UT System Building at 210 W. Seventh St. The first new command created since 1973 and the only one of the U.S. Army’s four commands in an urban area, AFC will be tasked with developing concepts and technologies to modernize the armed forces.

To do so, the Army will work closely with startup companies in Austin and around the country. Gen. John M. Murray, the commanding general of AFC, said the organization would play the role of both an incubator and a venture capitalist—providing support to companies and injecting funding to help solve military problems.

U.S. Army Under Secretary Ryan McCarthy said the move “is like no other” in the Army’s history, and it will open up new opportunities, but also may come with significant challenges for a government not used to moving quickly and nimbly.

In 2019, AFC will manage $32.4 billion in investments, which includes the procurement and research and development budget, said Lt. Gen. Paul Ostrowski, AFC’s director of combat systems. McCarthy said $11 billion of that budget will be devoted to science and technology.

According to PitchBook, a company that provides data on private markets, companies in the Austin-Round Rock metropolitan statistical area brought in $9.19 billion in capital investment from 2010-18, 10th among all metro areas in the country.

Valkyrie Intelligence LLC founder and CEO Charlie Burgoyne said the arrival of the military will have a dramatic effect on startups because AFC will bring not only its 500 employees, but also large and small defense companies looking to relocate to be close to the command.

“I think this has a bigger impact on Austin as a city than either Amazon[.com Inc.] or Apple [Inc.] headquarters moving here. I think it has really large implications here,” Burgoyne said. “Their support structure is going be gigantic.”

According to Mitch Jacobson, director of the Austin Technology Incubator at the University of Texas, that investment could have an effect on big technology names such as Dell also.

“For (the Army) to potentially invest in technologies, startup or not—that kind of money moves mountains,” Jacobson said.

Valkyrie, founded in May, specializes in applied science and strategy consulting. In other words, the company uses its technology to recognize patterns in data and get context from that data to predict behaviors.

That technology can be useful in the private business sector—say, for a bank that wants to predict if its customers will repay loans and minimize default. But it also has military applications. As an example, Burgoyne said machine learning could one day be used to predict if a soldier is at a higher risk for post-traumatic stress disorder or depression upon returning home from war.

GenXComm is another Austin-based startup that began in the private sector and is exploring a partnership with the military. Founded by University of Texas professor Sriram Vishwanath and PhD student Hardik Jain, GenXComm patented technology that reduces interference on Wi-Fi, cable and cellular 5G networks to improve performance.

In July, GenXComm received an award through the U.S. Air Force’s Small Business Innovation Research program of $150,000 to explore whether the company’s technology could be used to enhance radio communications on the battlefield.

Air Force Lt. Col. Eric Frahm said a $150,000 risk is a “small bet” for the military, but to a startup, that small award can make a significant difference.

Valkyrie and GenXComm sought out military applications for their company’s technologies, but some startups may not realize their idea is useful to the military.

Zach Walker leads the Defense Innovation Unit Experimental Texas, a Department of Defense branch that seeks out partners to find defense solutions. He said military organizations like AFC, DIUx, and the Air Force’s AFWERX innovation hub moved to Austin to proactively seek out those startups.

“I think companies will be surprised to realize how much they do to solve commercial problems is just as relevant to the Department of Defense. The trick for us is to make sure the DoD is seen as a good customer,” Walker said. “We always pay our bills, and we’re willing to work with you without taking over part of your company.”

The military recognized it could not continue with a process Ostrowski called “laden with bureaucracy.”

“We do have some great technology in the military. But it just doesn’t often keep up with the pace of commercial innovation,” Walker said.

According to data from the National Center for Science and Engineering Statistics, private businesses nationwide invested $355.8 billion in research and development in 2015, the most recent year available, while the federal government invested $54.3 billion.

Partnering with private innovators is not just a want; it is a critical national security need, according to Frahm.

“The situation has come to a point where we have an imperative where we have to innovate faster, because it’s starting to become a threat to national defense,” Frahm said.

But according to Frahm, the military is not looking to upend the startup culture in Austin.

“We’re not trying to change the character here,” he said.

After AFC’s activation, Mayor Steve Adler said the military’s investment in Austin is proof the city needs to hang onto that character.