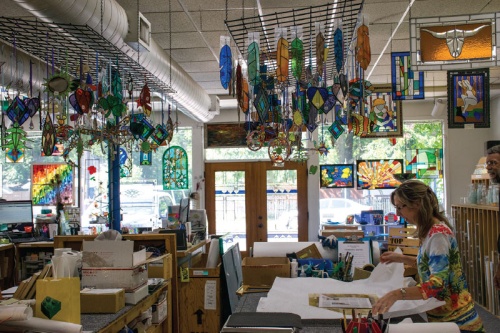 Blue Moon Glassworks is tucked among the homes in the Hyde Park neighborhood; local artists display their work in the shopu2019s street-facing picture windows.

After 25 years working in industrial sales, Jim Berry decided to turn his hobby of making stained glass windows into a career.

“It’s a very mechanical process,” Berry said. “I don’t draw or paint or anything like that. But I can take a pattern, and I can cut the glass to it, fit the lead to it and make a window.”

In 2001, Berry opened Blue Moon Glassworks in a small space in the North Loop neighborhood.

Five years later, the business moved to a 3,000-square-foot building in Hyde Park, where he offers custom design and repair services as well as classes on stained glass; mosaics; and flamethrowing, a torch-based method used to make glass beads.

Less than a decade ago, he said, there were half a dozen retail stained glass stores in Austin.

“We’ve got so many other things going, so if one thing, like flamethrowing, slows down, then mosaics pick up,” he said.

Today, stained glass remains a perennial favorite, as do the glass blowing classes he offers around the holidays, in which students create ornaments.

In addition to hobbyists, Berry’s clients include local churches, contractors and interior designers looking for custom glass work for clients, and artists, whose work is displayed in the shop’s front windows.

“It’s kind of a symbiotic relationship because we taught them to do stained glass and they buy materials from me. Then they bring back finished product to sell in our windows,” Berry said.

Many customers are drawn into the shop because of this “inviting” storefront, according to Berry. But he believes his view is just as good. “We’re looking out the window at green trees and quiet neighborhood and a lot of walking,” he said.