Office Depot pivots with launch of BizBox in Austin 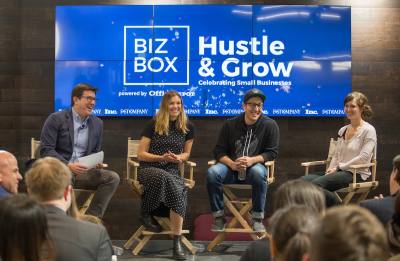 The creation of BizBox represents a shift for Office Depot, which is transitioning from an "ugly" box store to a "services-led business," Smith said. Fourteen BizBox locations have opened around Austin, with a national roll-out forthcoming.

The goal, according to Chief Retail Officer Kevin Moffit, is BizBox will function as a one-stop shop for small businesses, in much the same way Target does for households. Services BizBox provides include logo and website design, digital and social marketing, accounting and payroll.

"We've got your back," Moffit said, adding that BizBox itself is a kind of start-up. "We've done it before."

For business owners who have grown their companies over years, even decades, BizBox can help with what Moffit calls "the digital reboot." Based on surveys of Office Depot's small business customers, 30 percent do not have a website.

Optimizing data is one of BizBox's services—and a key component of its arrival in Austin.

"We think this is a key market to really launch ourselves as a different company," Smith said, explaining that data led Office Depot to Austin, one of the country's small business hotbeds.

In this environment, BizBox hopes to be both a resource and connector, facilitating relationships between customers.

Miguel Garza, one of three local entrepreneurs who participated in a panel discussion at the opening event, has found the Austin business community to be a welcoming one. As co-founder and CEO of Siete Family Foods, a healthy Mexican-American food company he runs with his family, Garza received invaluable support and advice from Katie Forrest, co-founder and president of Epic Bar and a fellow panel member.

Garza and Forrest were joined on the panel by Tyler Haney, founder and CEO of the activewear company Outdoor Voices. Although OV was founded in New York City, Haney recently relocated her business to Austin, citing its active scene as a draw.

She said Austin is a place where Haney and her team can make their own rules and grow to rival Nike. Austin, she hopes, will serve as OV's Beaverton, Oregon, where Nike is headquartered.

In 2016, General Mills acquired Epic Bar for an undisclosed sum, which allowed Forrest and her husband, Taylor Collins, to scale their company while also improving General Mills' sustainability practices.

Their company, which they continue to help lead, is devoted to renewable agriculture; partnering with a major corporation may seem anathema to their mission. Instead, the partnership has been fruitful—and serves as an example of the function BizBox hopes to serve for its customers, Forrest said.

The aim of BizBox, Moffit said, is to "foster entrepreneurialism within a large corporate structure." Office Depot is an established company far larger than any small business, but it hopes to leverage its strengths on behalf of its customers and, in turn, help them grow.

"We want it all," Moffit said.
SHARE THIS STORY