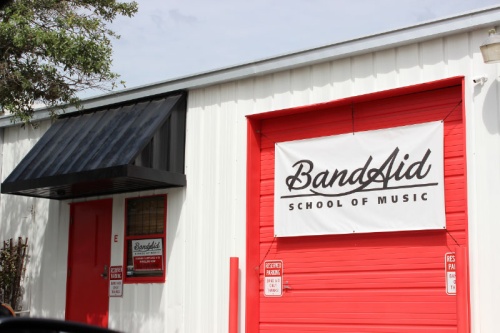 As a member of the band Bob Popular in the 1980s, Mays was a small-business owner in college.

Mays began teaching and helping to form bands of youthful rockers in the early 2000s after spending the 1990s working as a professional musician.

“[Teaching music] was just a natural progression. … I just wanted to spread the love of music to the next several generations,” he said.

Formally beginning in 2009 out of its Thornton Road location, Band Aid School of Music later expanded to a second location at Riverbend Church on Loop 360.

Now with more than 250 students, the school is gearing up for more expansion.

Earlier this year, the school tripled in size at its Thornton Road location. Mays said the addition will allow the school to increase its capacity to between 450 and 500 students, nearly double its size. Band Aid will also soon have 23 employees—music instructors who specialize in a broad range of instruments and styles.

Students learn instruments, such as drums, guitar, harmonica and ukulele as well as voice.

Mays said there are 17 bands taking lessons at Band Aid School of Music with anywhere from three to five youths in each band.

Mays said there is an art to forming bands. Among the band members, there should be a balance in both personalities and musical strengths.

Students are empowered to pick which songs they want to play and, eventually, to craft their own songs.

At the higher levels of the program, Mays said the school tries to create a “conduit” to the music industry—to make a lifetime of music performance as economically viable as possible.

“Our goal is for them do this on their own one day,” said Claire Boyd, the school’s operations manager. “We want to gradually equip them more and more to understand how it works out in the real world.”