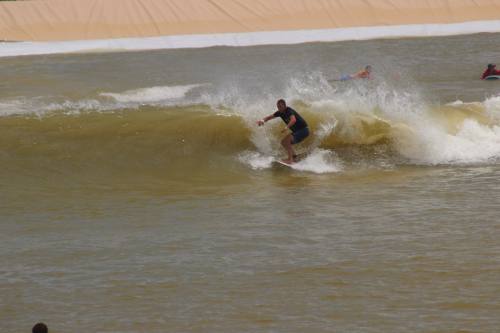 NLand Surf Park opened for the season May 12.

NLand Surf Park, the only inland surf park in North America, opened in Del Valle for the season May 12, and a combination of the start of Austin's summer and the end of the school year means business is picking up.

In a lagoon filled with treated rainwater surrounded by open land and grazing cattle, surfers can ride three types of waves depending on their experience level.

The wave operates "like a snowplow being pulled on a chairlift cable," said Chris Jones, the company's spokesman.

Since Memorial Day weekend, more visitors are starting to make the drive—NLand is 20 minutes from downtown Austin near the Austin-Bergstrom International Airport—to the surf park, according to Jones.

"There is a community of landlocked surfers that have been really excited about this," he said, adding he has already seen surfers from California and the Texas coast try out the NLand waves.

Jones said the beer will be brewed on-site, and the brewery will likely have four main taps as well as seasonal and rotating taps.

"For people in Austin who like surfing, this is a pretty good fix," he said.