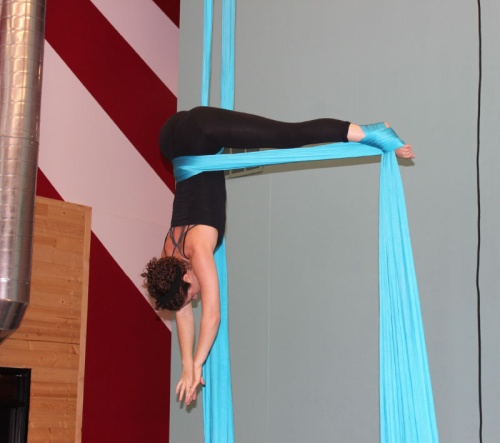 Growing up in New York, Winnie Hsia did not have access to dance or gymnastics classes, and team sports did not appeal to her.

Hsia’s relationship to fitness changed, however, when she moved to Austin from New York 12 years ago. Along with some friends, she began taking group lessons at a local aerial studio, where she learned how to do gymnastic exercises and acrobatic stunts using two parallel silk ropes suspended from the ceiling.

“It was really joyful for me to engage in a physical activity where I could see my own progress,” she said. “I was getting stronger by trying, but I also wasn’t being judged along the way.”

After about a year of group lessons, Hsia felt confident enough to join a class with strangers.

“[The experience] really changed how I view my body and my capabilities,” she said.

A few years later, hoping to introduce others to these benefits, Hsia founded Sky Candy, an East Austin studio offering classes in the aerial arts, circus training and pole dancing in July 2010.

The studio’s mission is to provide a space that is welcoming to all, regardless of fitness level, gender, income or size.

Initially, Hsia taught classes in the backyard of the Vortex Theater, stringing up a single aerial ring for students to use in the summer heat.

After bouncing around to a few different locations in East Austin, Sky Candy landed at Springdale General,  a new mixed-use development with a slew of local tenants from the creative industries, last year.

With the encouragement from her staff, Hsia also started a youth program at Sky Candy, fundraising money to support classes for at-risk youth and working with a licensed clinical social worker to help her staff take a therapeutic approach.

“It’s been so nice to be like, ‘Oh, I can now identify when someone is feeling stressed out ... [or] left out, when someone is frustrated with themselves for not being able to do something, and then help them and support them emotionally,” she said.

Hsia brings an entrepreneurial spirit to the business; she majored in marketing and accounting and ran social media  for Whole Foods Market.

When she first moved to Austin, she also owned Naturally Tasty, a small vegan and macrobiotic catering company, for a period of time.

While the new venture may seem different, Hsia said both fulfill a similar goal.

“I realized the thing I actually wanted was to be able to create spaces where people could gather and feel connected to each other and feel joy,” she said.