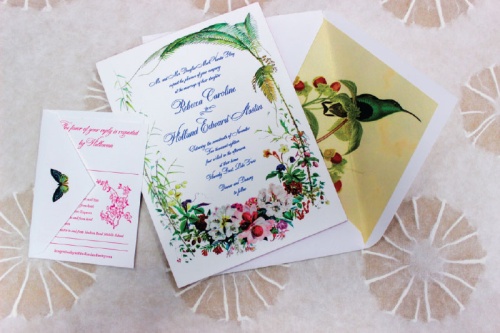 The store works with customers to design unique wedding invitations; day-of materials, such as dinner menus; and other products.

Inside a store on North Lamar Boulevard, one can find the stationery used at the Vatican, ink pots from Japan, sheets of hedgehog stickers, day planners from the German company Leuchtturm and, in the back, a station for customizing invitations.

“I used to be a schoolteacher, and I’ve always enjoyed being around people and ... giving parties and entertaining,” Ranney said. “So it was just kind of natural to walk in and help people with their invitations.”

In 1994, the business moved to its current space.

Since then, the stationery industry has changed.

“I think everything comes full circle,” Ranney said. “Eventually, people are going to get back into paper [more] and setting the tone for parties.”

In the past, customers gravitated toward birth announcements, holiday photo cards and formal invitations. “There’d be a picnic, and somebody would do an invitation,” Ranney said.

Parents now announce their new babies on Facebook;  families order Christmas cards online; and hosts send e-vites. “The internet has not been our friend in that respect,” Ranney said.

But Paper Place has adapted.

The clientele has also shifted. “It used to be mostly [women] ... Men came in if they needed business stationery,” Ranney said, adding that members of the city’s creative sector are drawn to the store.

Even the internet has proven useful. “Everyone is kind of a paper nerd,” Ranney said of her staff, who sources products from Pinterest and Instagram.

This adaptability has paid off. The business recently completed a renovation and is celebrating its 40th anniversary this year.

“We’re not just a typical retail store because we are a service,” Ranney said. “We ... deal with people one on one in important things in their lives.”