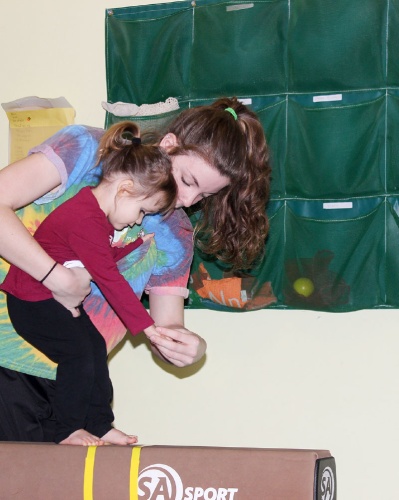 A student learns how to balance on the beam.

Ever since her older sister taught her how to do a back handspring off the fence in their backyard, Natalie Egan said she has been hooked on gymnastics.

“Since I was 6, there hasn’t been probably more than three days in a row that I haven’t been at a gym,” she said. “It’s where I live.”

Today the gym is her own. In 2007 Egan founded Jump Gymnastics, a children’s gym that focuses on skill building in a fun environment.

Both locations offer a morning program for children ages 1-2, afternoon gymnastics classes for students ages 3-12, birthday parties, and a summer camp that combines gymnastics and arts and crafts.

She began subleasing from a martial arts studio before renting her own space in South Austin in 2008. Three years ago, she and her husband, Randy, expanded to a North Austin location. This May, the business will celebrate its 10th anniversary.

While enrolled at The University of Texas at Austin, she began coaching, which she continued after graduating.

Although her students were competing at the highest level, Egan felt they were sacrificing their social lives and well-being.

“Jump developed from wanting to give people what I received as a gymnast,” Egan said. She realized that gymnasts did not have to compete at their highest levels to learn goal-setting and self discipline.

With $5,000 in savings from her teacher retirement fund, Egan grew the business steadily.

She developed a methodology she calls “skill deconstruction” to help children learn how to set goals, overcome fears such as the balance beam and identify as gymnasts.

“When you can do cartwheels and back handsprings on the playground you view yourself as someone who can do special things,” Egan said.

Jump aims to teach the fun, energetic and lighthearted gymnastics that Egan experienced as a child and which she has made the cornerstone of her teaching philosophy.

“Being able to give that gift to more people [than I can coach myself] is what I like most about running the business,” she said.

Overcoming fear
With proper instruction, students learn how to do things that may seem frightening at first, like the balance beam.

Goal setting
The Leap Frog program allows students to learn skills appropriate to their skill level and progress at their own pace.