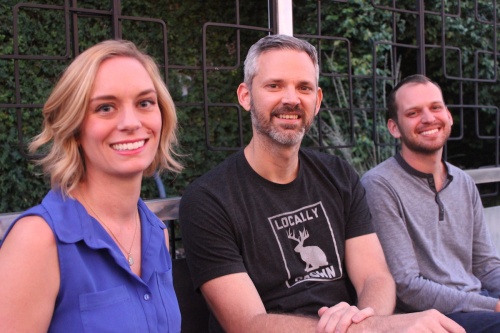 A group of bar and restaurant owners on West Sixth Street is forming a business association to better promote the district as well as resolve long-standing issues, such as parking, transportation in addition to a hard-partying reputation. From left, Ashley Fric, of J. Blacku2018s Feel Good Kitchen; Gary Della Croce, of Wahoou2018s and Matt Wolski, of Parlor Yard, are among the members of the business association.

An increasingly crowded nightlife scene in Austin partially prompted one of the city’s cultural districts to reboot.

The West Sixth Business Association will be formally established at the beginning of 2017. The 16 dues-paying members comprise bars and restaurants within the entertainment district, which spans West Sixth Street from Nueces Street to West Avenue.

Creating a collective identity for the district had been a long-stated goal among the operators, according to leaders in the business association, but recent financial adversity for some businesses increased the sense of urgency to band together. The district faced ongoing struggles with transportation and parking as well as a late-night and hard-partying reputation that many in the district feel hurt daytime operators.

Newer attractions, such as Rainey Street and the Rock Rose district at Domain Northside, as well as the Sixth Street Historic District have the look and feel of a district, said Dewitt “De” Peart, president of the Downtown Austin Alliance, which guides policy for much of downtown Austin. The West Sixth area, though, lacks a defined identity, he said.

Those issues spurred owners in the West Sixth district to begin meeting in September with an eye toward forming a
business association.

“A lot of people have said we’ve needed this for years,” said Matt Wolski, partner with Lion’s Share Hospitality, the group behind sports bar and district newcomer Parlor & Yard.

The meetings have already brought innovative ideas to the fold. Chariot, an on-demand, app-based shuttle van company, launched its Austin services in December with two routes. The company is in discussions with the West Sixth group to establish a late-night shuttle route from West Sixth to Rainey Street, according to the association.

Although bylaws were just adopted in December, organizing the business association is already paying  dividends, an association member said.

“Since this campaign has started, we’ve all experienced considerable increase in sales compared to what they were a few months ago,” said Chad Womack, owner of West Sixth bar The Dogwood.

In November the association held its first regular event aiming to promote dining options in the district. The group will continue hosting such events as BrunchWest and block parties in hopes of bringing exposure to the district to newcomers as well as to patrons who have not been to the district in a while.

A reintroduction may be needed. The stretch of West Sixth has undergone several changes in the past couple of years, with new additions that have quickly gained popularity but also closures that created long-term vacancies. However, many of those unoccupied buildings are being redeveloped for new tenants.

The former Miller Blueprint Co. building will undergo renovations and house a different business on each of its three floors, including The Goodnight. Kung Fu Saloon will also relocate to the former Benji’s Cantina location. The former Slate Restaurant location, at 612 W. Sixth St., remains among the vacancies in the district, however. The West Sixth Business Association is in early discussions with shuttle van service Chariot to introduce a late-night route from West Sixth to Rainey Street district. Each Chariot van holds 14 passengers, and rides can be reserved via a mobile app. The route is proposed to have pickup and dropoff spots at The Dogwood and on Driskill Street.[/caption]

Mobility options have diminished in the wake of Uber and Lyft’s departure from the city, many business association members said. The district’s late-night businesses have noticed a drop in activity since voters rejected a May referendum upholding policies such as fingerprint-based background checks on drivers that the companies opposed.

Local nonprofit RideAustin is among the operators that picked up where the two ride-hailing companies left off. The business association is working with the nonprofit to designate on-street drop-off and pickup spots for anyone hailing a RideAustin vehicle.

If ongoing efforts are finalized, a looped Chariot shuttle route would be established from West Sixth to the Rainey Street district, according to the a spokesperson for the association.

“I think everybody misses Uber and Lyft,” Womack said. “Everyone experienced a slight drop when they left. ...  With something like Chariot [coming online] to me [adding the service] is pretty much a genius plan.”

In addition to a lack of transportation options, parking has also held the West Sixth district back in recent years, members said. The DAA wrapped up a study of downtown’s parking system in November, and a parking strategy for the area is expected to be released early next year.

Womack, who not only owns Dogwood on West Sixth but also bars in the Sixth Street Historic District, chose to open his newest venue in the Rock Rose district, outside of Central Austin.

The Rock Rose district sprung up in the Domain Northside development this year and provides an alternative to downtown as a nightlife destination for the Austin area’s northernmost residents.

Union Venture Group’s Jeff Van Delden owns several businesses in the new district. Van Delden said he no longer owns any downtown establishments because of the problems that have plagued downtown over the years—namely, parking and the homeless population.

Ashley Fric, with J. Black’s Feel Good Kitchen & Lounge on West Sixth Street, is among the business association members. Fric said organization among the district is not about trying to take customers away from any of the increasing number of entertainment destinations in Austin.

“We aren’t trying to attack any of these districts,” Fric said. “We are a big part of what Austin is, and that’s what we’re really trying to let people know.” West Sixth Street entertainment district operators are forming a business association amid declining business but also welcoming new investment. Here are some of the changes in the district.[/caption]