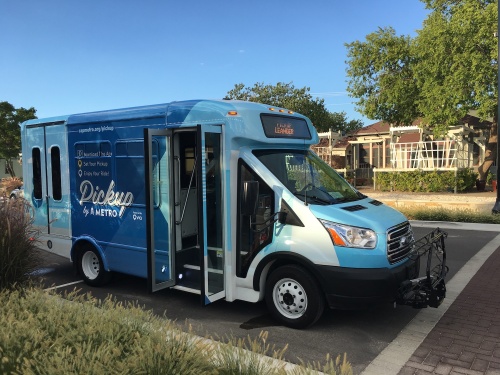 On-demand bus service is coming to Leander in December.

Capital Metro will launch a sixth zone of its Pickup on-demand bus service in Leander. The service is similar to ride-hailing and allows riders to arrange a ride through the Pickup app to their destination within a zoned area. Riders pay the standard fare of $1.25 per trip.

Plans for the added zone were first revealed in August after the the city of Leander announced in July it would consider withdrawing from the Capital Metro service area. Cities in Capital Metro’s service area, which include Austin and Manor, provide the transit agency with revenue from a 1 percent sales tax for service.

In August, Capital Metro staffers shared the plans to launch Pickup in Leander in late 2019.

“That’s been a time-consuming effort on a very short window to try and get this thing up and running, but a lot of folks in Leander and my neck of the woods in Williamson County are excited that this is happening,” said board member Eric Stratton, who lives in the Avery Ranch neighborhood of Austin in Williamson County.

Capital Metro staffers visited with residents, council members, school district officials and seniors to gather input on launching the service, said Chad Ballentine, the agency’s vice president of demand response and innovative mobility. He said the agency will soon announce the zone and that the input gathered by in-person visits with residents has been helpful to inform them about the service.

“We can show them right then and there how to download [the Pickup app] on their phone,” he said. “That’s been one of the best ways we’ve been able to reach out to talk to people.”

Capital Metro first launched Pickup as a pilot program in June 2017 in the Mueller area and later in the Exposition Boulevard area.

Editor's note: This post was updated to clarify the plans for Pickup service in Leander.