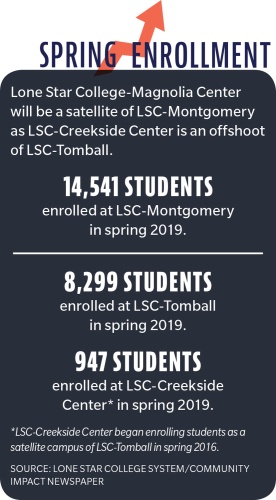 Lone Star College-Magnolia Center will be a satellite of LSC-Montgomery as LSC-Creekside Center is an offshoot of LSC-Tomball. Lone Star College-Magnolia Center, a satellite of LSC-Montgomery, will open in fall 2021 after more than four years of planning, officials said.

“We must’ve looked at 20 different pieces of land trying to find the right place,” she said.

Riley said traditional general education courses—including biology, English, math and government—will be offered to students who could then transfer to a four-year university or transfer to receive an associate degree.

The county saw its population increase 10.5 percent from 2014-17, according to U.S. Census Bureau data.

Riley said LSCS has maintained plans for a Magnolia Center since voters in Magnolia ISD elected to join the LSCS taxing district in 1998. After that election, homeowners within MISD boundaries began contributing funds to the system through property taxes.

LSCS centers are satellite campuses that serve as extensions of full campuses. Typically smaller than a full campus, centers provide classrooms and basic student services, according to LSCS information. The last center that opened in the Tomball and Magnolia areas was LSC-Creekside Center in January 2016.

Systemwide enrollment growth has also contributed to the need for the center, Riley said.  More than 89,000 students were enrolled at campuses in fall 2018, an 8 percent increase since 2013, LSCS data shows.

More than 15,000 students enrolled at LSC-Montgomery in fall 2018—a number not projected for the campus until 2025, according to a report by the Texas Higher Education Coordinating Board, which studied enrollment trends from fall 2013 to fall 2017.

Each LSCS center has a focus, Riley said. For example, LSC-Conroe Center has a welding, machining and automotive focus. However, Magnolia’s focus is still to be determined, she said.

“We can go in and say, ‘We’re building a welding lab,’ ... but maybe that’s not what the community needs,” Riley said. “We want to help with whatever the community and school district decide are the priorities for them.”