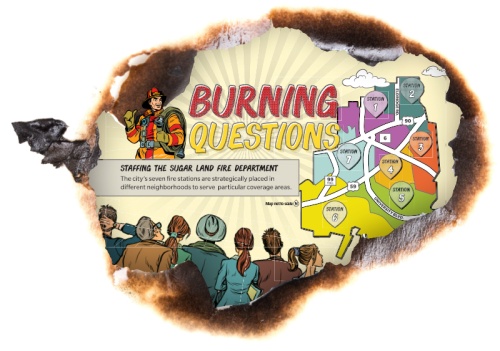 The Sugar Land Professional Fire Fighters Association released a written statement in April, arguing the city’s fire department is understaffed and advocating for the implementation of better practices; however, city officials believe the department is sufficiently equipped.

“We have a safety issue, not a budgetary issue,” Anderson said. “That means there are less personnel that are available to respond to people’s emergencies when they call 911.”

It is the union’s position that to ensure public safety, the city should hire an additional 25 firefighters with medical training, Anderson said. Aside from fire calls, firefighters respond to medical emergencies as well, ranging from heart attacks and falls to shootings.

“All you have to do is look at our response times, the number of fire calls we actually have,” Adame said. “[Based on assessments], 80 percent of the calls we make, we will be on scene within eight minutes and 30 seconds or less.”

It would cost the city an additional $3.2 million per year to hire 25 new firefighters, said Jennifer Brown, director of finance for Sugar Land.

“This is equivalent to about a 2 cent increase to the tax rate at our current taxable valuation,” Brown said.

The additional personnel are necessary, and the city can seek funding through federal grants to help offset expenditures, Anderson said. Although the city has increased overall personnel, staffing per fire truck or engine has decreased over the years.

“We had four firefighters per apparatus as a minimum standard,” Anderson said. “When we opened up Station 7 [in 2011], that was pretty concurrent with the economic downturn that we had, and the city at that time asked that we reduce our manpower on each fire apparatus responding to an incident to three personnel on a couple of apparatus.”

The city’s main performance indicator is response time, which can be misleading in judging quality of service, SLPFFA Secretary Johnathan Vance said.

“They can have one person on a fire truck or one person on an ambulance and still meet their [targeted] response time, but that has nothing to do with patient care or the ability to extinguish a fire or rescue an occupant,” Vance said.

To prepare, the city purchased a new ambulance for Fire Station No. 6 in Greatwood and implemented cross-staffing at Fire Station No. 7 in New Territory—assigning one team of three firefighters to staff both an ambulance and a fire truck as opposed to establishing two separate teams for each unit. If Station No. 7 receives a call, staff members must decide which vehicle is the most suitable for response.

The practice of cross-staffing was a recommendation of a 2017 departmental assessment conducted by the Center for Public Safety Management, which provides public safety consulting, training and research services to local governments.

“Under the cross-staffing concept, a fully outfitted fire truck and ambulance is placed at a fire station,” Adame said. “We use a dispatch method that sends the closest, most appropriate available piece of equipment to a call for service.”

The Fire-EMS Department will employ this concept for six months to determine its effectiveness, Adame said. After the given period, officials will re-evaluate this practice, although no specific date has been set at this time.

“It is our belief that this concept will improve response times for neighborhoods surrounding Station 7,” Adame said.

Anderson said it is difficult to find cities—particularly ones of Sugar Land’s size of roughly 117,000 residents—that implement a cross-staffing model because it is neither safe nor efficient.

“While it gives the illusion of two emergency response vehicles able to respond to emergencies, it actually cuts the ability for firefighters to respond in half,” Anderson said.

Although there are no official federal regulations related to staffing for local governments’ fire departments, the National Fire Protection Agency has determined generally accepted industry standards established to minimize risk to personnel and to promote fire safety.

Guidelines recommend a fire apparatus be staffed with a minimum of four personnel, said Ed Conlin, NFPA emergency service specialist. There is no NFPA minimum staffing recommendation for medic units, but an ambulance cannot be operated by less than two people, he said.

New Territory residents—within the coverage area of Fire Station No. 7 and its implementation of a cross-staffing model—have not voiced any complaints about the city’s fire or EMS services, said Michael Pincomb, president of New Territory’s board of directors.

“I’ve not heard one complaint or negative comment about it,” Molho said.

Anderson argues the quality of service comes in spite of the cross-staffing model—not because of it—recalling one incident involving an overturned big rig off University Boulevard and Hwy. 59 in January.

“Because we have such a tremendous reduction in the amount of personnel that are available to respond to calls, we had to use every single fire station at some point during this emergency to respond to this call and two other calls in the city,” he said.

Adame said when the department experiences high demands for service, emergency responders are prepared with mutual aid-agreements with neighboring departments and other protocols.

“On this particular incident, on-scene supervisors quickly assessed equipment and unit needs and returned apparatus back to service as soon as they were available,” he said.

Vance said union representatives plan to pursue the matter in the coming months, sitting down and discussing these issues further with city officials.

“It has everything to do with having the ability to safely and effectively take care of a citizen without injuring a firefighter,” he said.