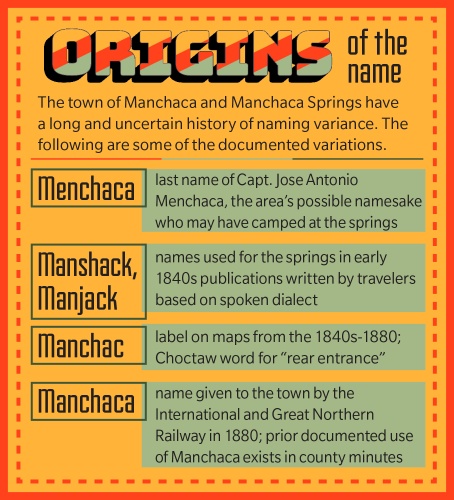 The town of Manchaca and Manchaca Springs have a long and uncertain history of naming variance. The following are some of the documented variations.

Whether you have called it “Man-shack,” “Man-chac,” “Man-cha-ca” or “Men-cha-ca” Road during your time in South Austin, the Austin road with the town of Manchaca at its southern end has a confused naming history.

Currently spelled as Manchaca Road, the city of Austin voted Oct. 9 to change the road’s name to Menchaca Road in honor of Jose Antonio Menchaca, a military captain in the Texan Revolution and a San Antonio mayor pro tem in the 1830s. According to the city, the change corrects a decadeslong misspelling of the road’s namesake.

However, the name change was put on hold when a lawsuit—filed Nov. 13 by nine individual Manchaca Road property owners and a group of businesses called Leave Manchaca Alone—challenged the renaming process.

The suit states that certain plaintiffs “never received any notice of the proposed name change” prior to Austin City Council taking a vote to change the name. It asks the city to “notify all property owners on Manchaca Road” before adopting an ordinance to change its name.

The lawsuit also states that some of the plaintiffs have information and evidence regarding the accuracy of the name’s history, but due to a lack of notice “did not have an opportunity to present the information at a public hearing.”

District 5 Council Member Ann Kitchen, who represents the Manchaca Road corridor, voted against the council’s October motion as a protest to the process, which she called a failure after many of the businesses in the area said they were unaware the council was considering a change. Kitchen told Community Impact Newspaper on June 7 that, while she is not taking sides in the lawsuit, she stands by her vote.

A ruling from Travis County District Court could be coming by the end of the summer, after the most recent hearing scheduled for June 10 was postponed.

Prior to changing the road’s name, the city of Austin had sent about 1,730 notices to property owners about the then-upcoming vote. Of those who received notices, 4% returned to the city with correspondences, three-fourths of which were against changing the name.

However, the lawsuit claims some property owners never received notice.

Additionally, many local business owners with interest in the lawsuit may not own the properties they occupy on Manchaca Road but say the change will come at the expense of time and money. Many renting space may not have been notified because it was not required by city ordinance.

Alycen Lucy, a Farmer’s Insurance agent who owns a Manchaca Road office and is a member of Leave Manchaca Alone, said the name change would require businesses to update business cards, stationery, advertising and marketing materials. As a licensed insurance agent, she said the change would also require her to update her official licensing with the state.

“There’s a multitude of things we would have to update if this takes place,” Lucy told Community Impact Newspaper on May 30.  “The change could mean different things for different types of businesses. It could be an out-of-pocket expense and a time expense to update all the different accounts they have.”

Furthermore, about 18 local businesses along the road currently have “Manchaca” in their names, including Manchaca Village Veterinary Care. Owner Rob Amoroso, also a Leave Manchaca Alone member, said he believes changes and rebranding could cost upwards of $40,000.

Retired Travis County Judge Bob Perkins began work to get the name changed in 2011 and created the Justice for Menchaca nonprofit.  He said he first learned about Jose Antonio Menchaca’s connection with the road, town and springs over 30 years prior after becoming a member of the Texas State Historical Association and receiving a copy of The Handbook of Texas, published in the 1950s.

“I read that Manchaca, Texas is named for Jose Antonio Menchaca and said, ‘Heck, if it’s named for him how come they don’t spell his name right?’” Perkins told Community Impact Newspaper.

Once retired, Perkins said he finally had time to do further research. With the help of individuals including Frank de la Teja—the appointed state historian of Texas from 2007-09—Perkins gathered information, and reached out to Menchaca’s descendants. As expected, the family said they wanted the spelling corrected, Perkins said.

In 2012, Justice for Menchaca created a petition to change the name and started raising money to fund the new street signs that would be needed to change the road, he said.  By 2016, the group had raised about $24,000 for the city.

Council Member Sabino “Pio” Renteria in 2018 worked with Perkins to get the change on a City Council agenda, with the successful city council vote to change the name in October.

The Manchaca Onion Creek Historical Association, a nonprofit of local residents that formed in 2006, calls the claim that Menchaca is the spring’s namesake “an oral tradition.” The nonprofit’s official stance is that official documentation from the 1800s has “not been discovered that would support this story.”

According to the association, the first maps found referencing the area of the springs use the name “Manchac” in the 1840s.  Manchac is a word used by Choctaw Native Americans—a tribe that had inhabited the Southeast United States—meaning “rear entrance.” The name was also used in similar Louisiana settlements and could be found on maps from the 1800s of that state.

When the International and Great Northern Railway came through the area in about 1880, the company named the town “Manchaca,” adding the “a” at the end of the name for the springs.

Perkins said Menchaca’s name was spelled incorrectly on some war documents, which could have caused the area to be misspelled incorrectly early on. Additionally, he said wealthy slave owners moved to the Manchaca area in the late 1840s soon after the Mexican-American War. He said he believes they may have dropped the “a” from Manchaca, possibly to remove the name’s Mexican roots or because “Manchac” was a more familiar term in the Southeast.

The renaming of things from Manchaca to Menchaca also is not unprecedented.  A similar renaming took place when Austin ISD built a new school for the community in the 1970s, replacing the old Manchaca School with Menchaca Elementary School. Then-trustee Gus Garcia worked with the district to change the name and correct what had “come to be misspelled and mispronounced,” according to documents at the Austin History Center.

An official historical marker by the Texas Historical Commission titled “Education in Manchaca” also links the school and community to Menchaca and was erected in 2009 with support from AISD and the Travis County Historical Commission. The marker reads that the community of Manchaca was “named for a campsite of Tejano Army Officer Jose Antonio Menchaca.”

Perkins said it is not his or the city of Austin’s place to push for changing the name of anything outside of the city limits, but that within the city he feels the misspelling should be corrected.

Lucy said Leave Manchaca Alone is not basing its stance on either side’s version of history, which she said does not seem to have “concrete proof either way.” She said the group’s focus is limiting the inconvenience a name change would put on local residents and businesses.

“I have no problem honoring [Menchaca,]” Lucy said.  “We could have a library named after him, or a park, or even an honorary street name. There are options that would not inconvenience thousands of people.”