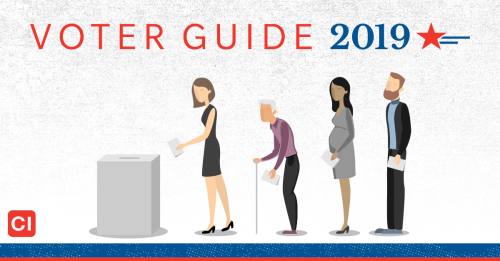 Over 100 candidates are in the running for various city and school board positions. Here is a guide to what's on the ballot, where to vote and more information.

Registered voters in Harris County can cast their ballots at any polling location within the county on Election Day. A full list of voting centers and early voting locations can be found at www.harrisvotes.com

Click the race to view Candidate Q&As, if available. Incumbents marked with an asterisk (*)

Ballot language: In order to enhance mobility and ease traffic congestion within METRO’s territory and service area, with no resulting increase in the current rate of METRO’s sales and use tax, authorization of METRO to issue bonds, notes and other obligations payable, in whole or in part, from 75% of METRO’s sales and use tax revenues in an aggregate principal amount not to exceed $3,500,000,000, for METRO’s transit authority system, including creation of “METRORapid” (a new bus rapid transit system), improvements to METRO’s regional express network of two-way high occupancy vehicle lanes and diamond lanes, construction of a Phase III of METROrail and related parking facilities, implementation of boost & signature service and other METRO bus services, system enhancements (including accessibility to bus stops for seniors, the disabled and others) and construction of new facilities, known collectively as the METRONext plan, approval of such plan and the construction of a Phase III of METRO’s rail system for purposes of the city charter of the city of Houston, and dedication of up to 25% of METRO’s sales and use tax revenues through September 30, 2040, to street improvements, mobility projects and other facilities and services, as authorized by law.

Texas voters can vote for or against 10 amendments to the state’s constitution Nov. 5. Here is a breakdown of the ballot language and what it means.

How can I vote by mail?
Registered voters may cast a ballot by mail if they meet one of these criteria: are away from county of residence on Election Day and during the early voting period; are sick or disabled; are 65 years of age or older on Election Day; or are confined in jail, but eligible to vote. Those who meet these criteria can apply to the county no later than the 11th day before Election Day.

How do I know if I am registered to vote?
The Harris County tax office oversees registration. Residents can check their registration status at www.hctax.net/Voter/Search
What can I bring into the polls?
According to the Texas Secretary of State, the use of wireless communication devices is prohibited within 100 feet of the polling location. The taking of photographs is also prohibited. Voters can bring written materials as long as they are not intended to be used in electioneering.

Can I bring someone to assist me while voting?
Any person can ask someone to help them other than their employer, an agent of the employer, or an officer or agent of a labor union to which the voter belongs.