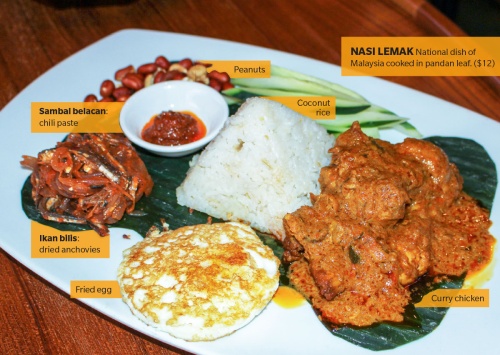 Alex Au-Yeung, owner of Phat Eatery Malaysian Street Food, can typically be found attending to his customers, cooking or washing dishes at his restaurant. But when he is not visible, he said he is likely developing new menu items in the back.

Au-Yeung, who was born in Malaysia and raised in Hong Kong, opened Phat Eatery in Katy Asia Town in June 2018 and said customers often wait up to two hours before being seated.

He said his goal is to challenge the status quo and stereotypes of what Asian restaurants can be.

“Malaysian restaurants that have appeared in Houston for the past 12 years have basically served the same menu at the same price in the same environment, and all the preparations were the same,” Au-Yeung said. “I’m trying to bring something new. ... I just want to have a better Malaysian restaurant.”

Phat Eatery offers a menu of Malaysian cuisine found in mamak stalls, which are open-air food establishments found in Southeast Asia, particularly in Malaysia and Singapore.

“Malaysian food is a big melting pot,” Au-Yeung said. “Think Chinese, Indian, Thai, Singapore, Vietnam, plus the colonial days of the British and Dutch. No, it’s not that spicy.”

He said most dishes on the menu are meant to be shared as they are in Malaysia, where it is rare to see each person at the dining table with their own plate in front of them as is customary in the U.S.

Phat Eatery is not the first restaurant Au-Yeung has owned. He opened Wok & Roll, a small business with a Chinese menu and eight seats, in the Houston Galleria area in 2001.

But he sold it two years later when he grew tired of the demanding hours needed to make a small profit.

Instead, Au-Yeung started a point-of-sale business to cater to Asian restaurants across Texas and Mexico.

He said he worked installing computer systems for 10 years, noting his clients’ successes and failures, before he was motivated to rediscover the hospitality industry for himself. He then opened Phat Eatery in Katy.

“After being in many fields, I found that I love hospitality industry the most and never look back,” he said.