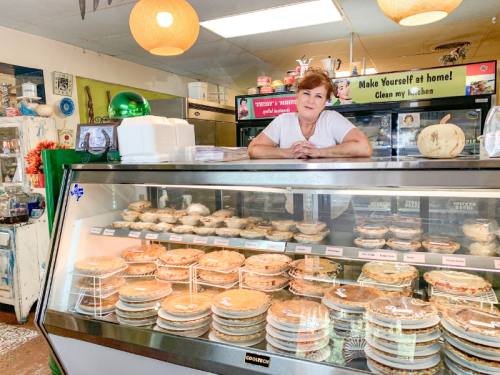 Texas Pie Company sees about 200 customers per day in the restaurant.

When Julie Albertson moved Texas Pie Company from Austin to Kyle 20 years ago, she said she did not expect that it would become part of the foundation of the city’s identity.

At the time, it was more financially feasible to buy the building at 202 W. Center St., Albertson said, and it allowed her to open a storefront in addition to the company’s wholesale business.

“At that time it was a bedroom community, much more than a live-in community,” Albertson said.

Today, the expanded Texas Pie Company—Albertson later bought 204 W. Center St.—is at the center of the much-changed downtown in a much bigger town, under a sign large enough that it actually has two sign permits, she said.

“The sign makes them stop, but the pie makes them stay,” she said. “We went from seeing probably three or four customers a day—now we see 200 a day, maybe more.”

The shop has made all kinds of tourist lists, Albertson said, and on most days the out-of-towners outnumber the locals.

But it is not just the sign that brings them in. In 2016, two big changes came to the Texas Pie Company. First, it won H-E-B’s Quest for the Texas Best competition, which meant $25,000 and a contract to produce pie shells that are now sold in 350 stores around the state.

Second, the city of Kyle launched its effort to become the “Pie Capital of Texas”—with Texas Pie Company as the centerpiece of the campaign.

“Craziest thing ever,” Albertson said. “We didn’t set out to be this. I set out to bake pies and pay my bills.”

The shop is now an integral part of the city’s efforts, but Albertson said that the focus is on the community.

“The city of Kyle is big on promoting the new branding initiative,” Albertson said. “But that’s not about us; it’s about the community as a whole.”

The store now serves lunch, and Albertson said it attracts many Kyle residents in addition to city and state elected officials. Even so, the storefront business pales in comparison to what Albertson calls the shop’s “backdoor business”—meaning about 50 corporate contracts and catering gigs that put Texas Pie Company pies in Austin’s Magnolia Cafes, Fresh Plus grocery stores and Planet K shops, among many others.

Albertson, who now sits on the city’s economic development and tourism board, said there is more growth in the future for the Texas Pie Company. But even that is really about the city.

“It helps bring more, higher visibility to the city of Kyle,” she said. “And it’s all about bringing more people to Kyle.”