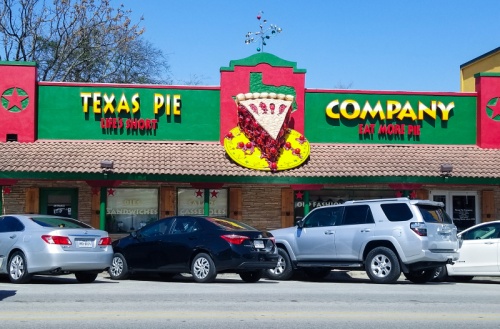 The city of Kyle intends to be Texasu2019 new destination spot as city officials lay the groundwork to be branded asnthe u201cPie Capital of Texas,u201d thanks in part because it hasnbeen home to The Texas Pie Co. for 32 years.

The city of Kyle intends to be Texas’ new destination spot as city officials lay the groundwork to be branded as the “Pie Capital of Texas,” thanks in part because it has been home to The Texas Pie Co. for 32 years.

Kyle City Manager Scott Sellers said branding the city as the “Pie Capital of Texas,” an initiative the city began in 2016, shows the local community, potential residents and travelers Kyle has something unique that cannot be found anywhere else.

“What makes the pie brand fit so well and what has brought the enthusiasm is that a brand is earned, not given. So often communities will create a brand and then try to live up to the brand, and so many of those initiatives fail because those brands were never really adopted by the community,” Sellers said. “In this case, Kyle has been living up to [the “Pie Capital of Texas”] brand for many years. Now we’re just packaging it in a way that makes sense.”


What is in a brand?

David Wyatt, a director at Elizabeth Christian Public Relations, has experience in branding places, such as the city of Marfa and Austin’s Cultural Arts Division, and said as Austin grows, surrounding cities have the potential to become like New York City’s boroughs with their own unique vibe.

“What’s happening already is that as [Austin] keeps growing out, it’s approaching and consuming these smaller communities, and if these cities don’t actively work to communicate what they’re about, they’ll just become a proximity town, [where] residents don’t have a relationship with the small town,” Wyatt said.

Branding a city, Wyatt said, is not only about drawing more tourism and development traffic or building a sense of community.

“Hitting the right note is important because not only do you not want to be seen as phony but ultimately, [it] is not just the logo. It’s not just a cute tag line or the color palette you come up with, it’s about reflecting people’s actual experiences,” he said. “It’s one thing to see the brand; it’s another thing to experience it.”

Buda Tourism Director Lysa Gonzalez said cities promote themselves to get people to stay in their hotels, which generates a hotel occupancy tax that gets returned to the city.

Beyond using hotel tax revenue, which is not always reliable in tracking travel dollars, Wyatt said monitoring social media, digital media, inquiries into businesses and media coverage are good ways to track what is working.

Rebecca Ybarra-Ramirez, director of the San Marcos Convention and Visitor Bureau, said San Marcos uses a third-party company that can track people entering San Marcos through their technology devices from when they first researched the city to when they first arrived.

“Most [advertisements] are digital these days because you can capture a larger audience,” Ybarra-Ramirez said. “You can select who you want to see and how many people your [advertisement] can reach depending on your budget. It’s really interesting what technology can do these days, but it gives us a better idea of what markets we are not targeting and can do better with.”

According to Kyle Mayor Travis Mitchell, the pie capital initiative is a way for Kyle to stand out from Austin’s shadow.

“By being an Austin suburb, we have great opportunities, but we also struggle with the region trying to define who we are instead of us trying to define ourselves,” Mitchell said. “We need to encourage development patterns that set [Kyle] up to be a robust and diverse city. Things like walkability and sense of place don’t happen on their own, not when you are an Austin suburb. To create that identity or sense of place requires the community demanding it.”

City of Kyle Chief of Staff Jerry Hendrix said the city has been brainstorming for years on how to brand the city; however, Communication Specialist Kim Hilsenbeck said enough input from the community and visitors showed that Texas Pie Co. was one reason people visited Kyle.

“We’ve heard time and time again that, ‘Well, I came [to Kyle] for pie.’ So at the moment, [tourists]  are coming for one company that serves sweet pie, but what they maybe don’t realize is that there are a bunch of other types of pie,” Hilsenbeck said. “We already have several companies that sell pie, but we don’t tend to think of it that way. We want people to think of pie as something a little bit broader.”

Hilsenbeck said the plan to officially become the “Pie Capital of Texas” is not completely “outlined, detailed and fleshed out,” but the city is working to put together a branding committee, made up of business owners and city officials, that would forge the way of the initiative on the local level.

So far in Kyle’s journey to become established as the “Pie Capital of Texas,” the city applied for an official U.S. trademark branding Kyle as the “Pie Capital of Texas” in March 2017; held its inaugural Pie in the Sky Hot-Air Balloon Festival during Labor Day weekend; joined the American Pie Council; launched its “certipied” business initiative on National Pie Day in January; and launched a community outreach initiative on National Pi Day, March 14.

Sellers said Kyle is in a very good place from a growth, economic development and infrastructure standpoint.

“We have matured significantly over the past couple of years,” Sellers said. “The city’s location and favorable development climate has brought a large number of prospects to Kyle. In the near future, we will see some significant economic development progress.”

On the local level, Kyle’s “certipied” business initiative asks business owners to incorporate pie into their business. For example, Hampton Inn gives out pie-shaped and -scented candles to guests and businesses. Broadway Bank will be the official sponsor for all pie-eating contests in Kyle. Financial advisor Trish Wilder, Edward Jones has pie cutters with the logo on them, and Sky Realty Kyle gives pies bearing its logo to new customers who buy a home with them.

“[The pie capital initiative] is more than Texas Pie Company already,”  Hilsenbeck said. “We see this [as] an economic boon to anyone that gets [certipied] and probably peripherally for those who do not get involved because ideally it will cause more traffic, more tourism, more people going to businesses and spending money while they are here. It’s not like we’re giving people money to become ‘certipied’; it’s more of a promise. The more people that get involved and embrace it, the better off everyone is.”

According to Hilsenbeck, Kyle’s business community has been positive about the potential to become “certipied” and is reaching out to the city with ideas of how to get involved.

Amber White, who has been a Kyle resident since April 2015, said she is open to Kyle being branded as the “Pie Capital of Texas”  but is afraid other cities “will see it as somewhat of a joke.”

“I would brand Kyle as ‘Where country meets the city.’ Austin is expanding outwards, and [Kyle] trying to claim being a small Texas town while having a huge H-E-B, Target and Walmart, along with most other big-box stores is just living in the past,” White said.

“I believe anything that enriches my neighbor, Kyle—culturally or otherwise—enriches me and the citizens of my city,” Cook said. “I also think that it is very creative and unique to select a theme like the “Pie Capital of Texas.’”

As the branding plan continues to take shape, Wyatt said an initiative of this scale could take anywhere from a full year to five years before it really takes root.

Wyatt also said being open-minded and involving everyone can help make a branding initiative successful.

“People and communities really need to think of branding as not just sort of a shiny wrapper or a bow they are putting on [a] thing,” he said. “Cities are really investing in the enterprise of their municipality. It’s about investing a larger amount of money in the short term to get a return year after year that the brand is used.”