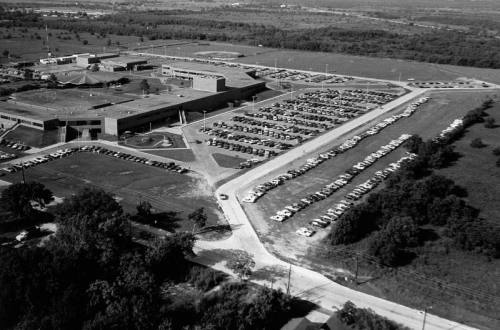 It is fitting that to conclude its 70th year of operation, Alvin Community College is celebrating its highest enrollment ever. With 5,993 enrolled students, ACC has come a long way since its first class of about 100 students.

The institution, which was founded in 1948, first functioned as a part of Alvin ISD and included both 11th and 12th grades. It remained part of AISD until 1971, when the city created the Alvin Junior College District with a separate administration and board. Over the years, it has had six presidents, with the newest starting her term in 2014.

“We’re so blessed to have this community college in our own backyard,” ACC President Christal M. Albrecht said. “They had the wisdom and foresight to plan for and invest in higher education in our community.”

Over the years, ACC has evolved to serve the needs of the community and stay relevant to trends in the job market. It has also been part of some historic moments, such as in 1964 when ACC became the first community college in Texas to offer classes to prison inmates as part of the Second Chance program.

Standout programs include the industrial training program as well as medical programs such as nursing and polysomnography, or sleep medicine.

This year’s record enrollment beats out the previous high of 5,721 students in the fall of 2010. ACC had been on an upward trajectory to beat that record when it was heavily impacted by Hurricane Harvey.

“Recovery from Harvey took longer than expected, and a lot of students were affected or relocated after the storm,” Albrecht said. “We’ve been through a rough patch but I think we are back on track to further growth and continued student success.”

Looking toward the future, ACC is in the planning process for a large renovation of its facilities. The two bonds to renovate the campuses were not approved, so the board of trustees borrowed $25 million for projects. While a large portion of the renovation will be updating the infrastructure of existing facilities, there will also be the addition of a culinary teaching kitchen and a completely renovated cafeteria and bookstore.

“We really want to make sure we’re paying heightened attention not only to access, but also to the success of our students,” Albrecht said.

The number of certificates and diplomas being awarded by ACC has increased 35% since Harvey, helping the school reach its 60X30 TX goals. 60X30 TX is a plan that was launched in 2015 to have 60% of adults have a degree or certificate by 2030.

“That’s the most important thing: not only that people can come to school here, but that they make it through and succeed,” Albrecht said.