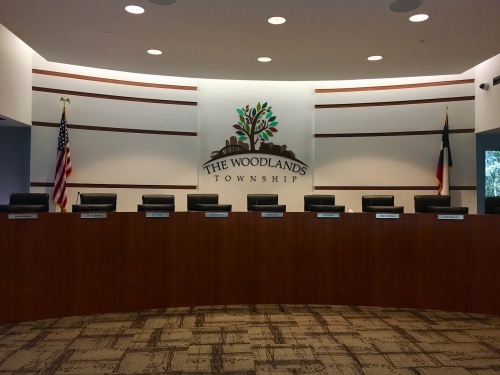 The Woodlands Township board of directors will meet Oct. 23.

The Woodlands Township’s ongoing incorporation study is entering its final phases, with several items left on its decision checklist before the end of the year. At the Oct. 23 meeting, the board of directors will decide on which of three law enforcement models to employ when developing an initial maximum tax rate for a city. The initial maximum tax rate is expected to be set at the Dec. 11 meeting.

The board heard a presentation by The Novak Consulting Group on Oct. 17 outlining the costs associated with three different models for law enforcement under incorporation. The three options are: an independent police department that does not contract any services to the county; a hybrid model, including both a local department and some county services; and the current model—continuing to contract for all law enforcement services.

An incorporation election date has not yet been set for 2020, but the decision to do so could be made early in the year, officials have said.

The full-service law enforcement model would require a new city’s police department to handle all of the tasks and responsibilities currently covered through contracts with the Montgomery County Sheriff’s Office and the Harris County Precinct 4 Constable’s Office.

According to the presentation by Novak, additional officers and support staff in the full-service model would contribute to an estimated $7.68 million in net new personnel costs.

However, board members disputed other aspects of Novak’s estimated startup cost for a full-service department because it included about $30 million for the cost of building a police headquarters, which board members said would likely not be necessary.

Board Chairman Gordy Bunch said the township already has the rights to use the 16,000-square-foot building being used by Montgomery County Sheriff’s Office District 6, which would offset some of that cost.

“[That] would greatly mitigate the high-end point of this,” Bunch said. “We would have the ability to assume and renovate.”

Several board of directors members said during the presentation that the full-service department did not seem feasible.

“It’s impossible for us to set up our own police department in year one,” Director Bruce Rieser said.

“You get the scale of the county for the major crimes and the major infrastructure … and then we have our own local Woodlands police department to handle the traffic and minor issues and ordinance enforcement,” Bunch said.

While the estimate for the startup year under the full-service model—including ongoing and one-time costs such as headquarters construction—was $62.76 million, according to Novak, the hybrid model was estimated at $44.37 million. Keeping the existing contract arrangement would cost about $11.98 million, just slightly higher than the township's current annual operating cost for law enforcement contracts.

Further discussion of the law enforcement models is on the agenda for the Oct. 23 meeting at 6 p.m. at 2801 Technology Forest Blvd., The Woodlands.