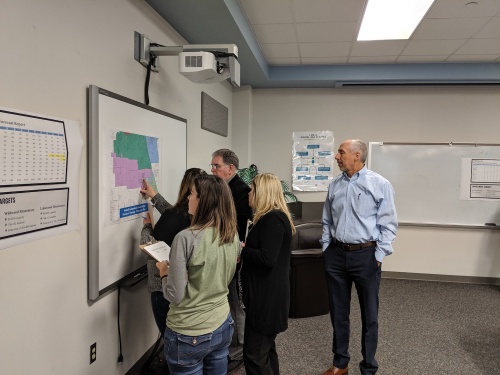 The district committee—made up of about 20 parents representing an assortment of TISD campuses, a few staff members and Rocky Gardiner, the director of school district consulting for Templeton Demographics—gathered for its third and final meeting Oct. 17 to discuss recommendations for realigning elementary and junior high attendance boundaries. The committee voted on a total of six plans for elementary and junior high realignments—selected from the committee's work earlier in the month—and hybrid plans incorporating suggestions from the TISD Transportation Department. Although a consensus was reached for recommending new elementary boundaries, a recommendation for realigning junior high boundaries was not finalized Oct. 17 due to time constraints.

"This is an exciting time in the district," Chief Operating Officer Steven Gutierrez said.

The new schools will be part of a TISD complex at Cypress Rosehill Road and Hwy. 99 that will also include a district football stadium and water and wastewater treatment plants. Land clearing is underway at the complex, as Community Impact Newspaper previously reported. Construction of the district complex is funded by the $275 million bond referendum voters approved in November 2017.

"All of our schools are great. We're confident that this new school will be no different in holding the quality of excellence that we expect and that you demand as parents," he said.

The board of trustees will consider naming the new schools during its Nov. 12 meeting, Gutierrez said.

Gutierrez said some parents have suggested the district avoid the rezoning process by adding more temporary buildings at overcrowded campuses, such as Wildwood Elementary and Willow Wood Junior High.

“While we understand that and we love the fact that people feel that connection to the school, that’s just not something that we as a district and as a school board have said that we want that kind of level of overcrowding," Gutierrez said.

“I understand in the end it won’t make everybody happy,” Superintendent Martha Salazar-Zamora said Oct. 17. “People are usually OK with it until it affects their family. It has to affect someone’s family, or else, this is all for nothing. We have new schools being built, and we will have to have children in them.”

"There's a reason we don't have a school there [on Telge]," he said.

The district owns land for a future third high school and other facilities at Juergen and Mueschke roads, Warnasch said.

These numbers return the overcrowded elementary schools to 80%-85% of building capacity and Willow Wood Junior High to 70%-80% of capacity, he said.

During the public forum, residents can suggest minor changes to the proposed rezoning maps, which the board of trustees is anticipated to consider Dec. 10, Gutierrez said. Rezoning plans are not final until the board's approval.

“If there is a small tweak that makes sense and doesn’t drastically alter the work that this committee did, we may do that," he said.