Tomball ISD attendance boundary changes to go before board in December 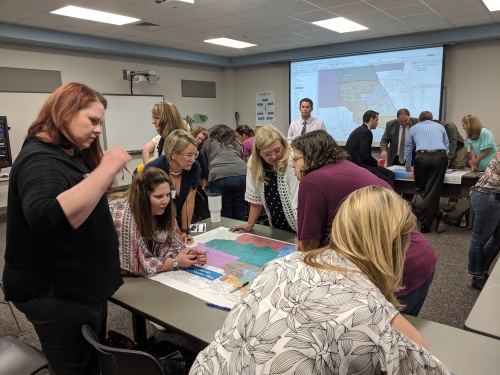 The new schools—an elementary campus and a junior high campus—will be part of a TISD complex at Cypress Rosehill Road and Hwy. 99 that will also include a district football stadium and water and wastewater treatment plants. Land clearing is underway at the complex, as Community Impact Newspaper previously reported. Construction of the district complex is funded by the $275 million bond referendum voters approved in November 2017.

The committee—made up of about 20 parents representing all TISD campuses, a few staff members and Rocky Gardiner, the director of school district consulting for Templeton Demographics—met for the first time Oct. 3 to discuss options for realigning attendance boundaries for the elementary school, opening in August 2020, and the junior high school, opening in August 2021. The Oct. 3 discussion focused on redrawing boundary lines for the new elementary school.

Gutierrez said targeted opening enrollment for the new elementary school is 552-644 students, which would be about 70% of the building's capacity of about 920 students. The new school would largely be populated by reducing enrollments at Wildwood Elementary by 363-409 students and at Lakewood Elementary by 150-195 students, as these two elementary campuses are near or above building capacity, Gutierrez said.

He said the committee's role is to agree on attendance boundary changes that would reduce Wildwood and Lakewood enrollments to 80%-85% of building capacities, leaving room for projected enrollment growth.

"If we do this [realignment] work correctly, there really is capacity [in elementary schools] with what we have and the one coming on next year for the next 10 years," Gutierrez said, referring to enrollment projections from Templeton Demographics. "We are going to gradually fill that [new] school."

The targeted enrollment for the new junior high school is between 486-613 students, Gutierrez said. This new junior high school—with a proposed building capacity of 1,500 students—would relieve overcapacity at Willow Wood Junior High School, he said. The committee's goal is to reduce Willow Wood's enrollment by 486-613 students, Gutierrez said, returning the campus to 70%-80% of its building capacity.

Gutierrez said the committee is tasked with realigning attendance boundaries for the elementary and junior high schools. High school and intermediate boundaries will not be altered at this time, he said.

However, this could mean students at the new junior high campus could be split between Tomball and Tomball Memorial high schools.

"If you are currently zoned to Tomball High School, your high school is still going to be Tomball High School. If your neighborhood is zoned to Tomball Memorial High School, that's where you're going," Gutierrez said. "This will really be one of the first times where we have a campus where we have students that are Cougars and Wildcats. I think that's also a unique opportunity for that kind of culture building and understanding, 'Hey, we still are one Tomball.'"

Gutierrez said redrawing boundary lines can be an emotional decision for all parties involved. As such, Gutierrez outlined several guiding principles for the District Zone Committee to follow during the realignment process. Principles guiding the committee's decision include optimizing space so campuses are neither overcrowded nor underutilized, making an effort to keep subdivisions together, using natural boundary lines to determine attendance zones, considering the effect changing attendance zones will have on families, planning for future growth, and striving for efficient bus transportation.

"We're going to try the best we can to keep neighborhoods and communities together," he said. "We want to honor that, respect that and try to do our best to keep that together."

The committee meets again Oct. 10 at the Staff Development Center, located at 1302 Keefer Road, Tomball, during which time the committee will examine realigning junior high boundaries, Gutierrez said. A third meeting is scheduled for Oct. 17 to finalize the committee's recommendations.

A public forum is scheduled for 5:30 p.m. Nov. 14 at the Staff Development Center for district residents to ask questions about boundary changes, Gutierrez said. The committee will recommend boundary changes to the board of trustees for approval Dec. 9-10, and information will be distributed to affected TISD families in December or January, Gutierrez said. Board members are also expected to consider naming the two new schools at a November meeting, he said.

"As our district grows, there are at times changes that we need to adjust to and adapt [to] and some complexities, and of course, a new school—or new schools—means we have to build the schools up," Superintendent Martha Salazar-Zamora said during the meeting. "There is a lot of work to be done. ... This happens every so many years, and it is just a sign of progress and growth."