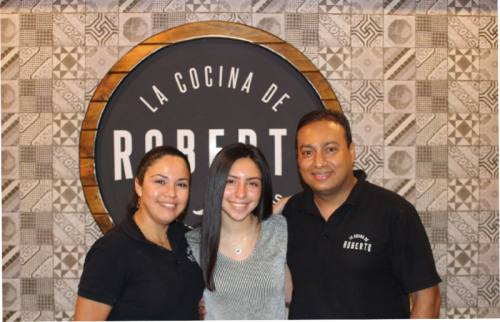 Visitors to La Cocina de Roberto can expect to be greeted by a menu of Latin fusion food that would feel right at home in a family kitchen.

“It’s a family ambience,” owner and chef Roberto Carlos Rubio said. “Everything here we make with love, and [we] try to take care of the customers like when you are in your home. I wanted to keep something very family[-oriented].”

Prior to founding La Cocina De Roberto, Roberto gained a passion for cooking through years of work in the food industry. Roberto said opening his own restaurant was a lifelong dream he was finally able to fulfill by launching La Cocina de Roberto in March 2017.

The kitchen’s menu was designed to be recognizable to people from a variety of Latin American cultures, with inspiration from Roberto’s own home cooking. The food pulls from Roberto’s Honduran background, his wife’s Mexican heritage and a sampling of other Central American cuisines for a blended slate of homestyle Latino fare.

“At home, we used to have everything, not just Mexican food. Honduran one day, Salvadorian, even Italian. He’s not just a good Hispanic food maker; he’s good at everything,” said Roberto’s daughter Mariana.

“Everything is clean, simple; it’s like the menu,” Roberto said. “We are not complicated.”

The kitchen also offers catering services, initially run from the Rubios’ home prior to the La Cocina de Roberto’s establishment, which allowed the restaurant to further connect with The Woodlands-area community. The Rubios said La Cocina de Roberto frequently delivers to students and teachers at area schools, and the kitchen has catered local events and donated food to community members since its founding.

More than two years after opening, Roberto said the restaurant has found a local audience he hopes to grow in the coming years. He has also considered opening additional locations in The Woodlands in the future to further develop his brand while maintaining the kitchen’s family-focused atmosphere shared between its founder, staff and customers.

“[Having] this business made me feel happy for me and my family, but when I see the faces of the customers, and they say ‘Oh wow, this is great. This is delicious,’ that’s my pay,” Roberto said.