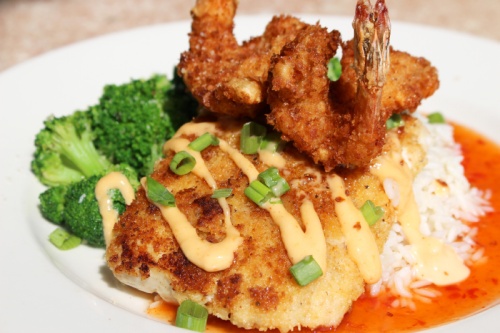 The island mahi sits on a bed of white rice and is served with sauteed broccoli and two large coconut-crusted shrimp. It is dressed with a volcano sauce and a Thai chili sauce.

Rockfish Seafood & Grill in Southlake has been around since the 1990s. Southlake was the third location for the company, which now has 10 restaurants in the Dallas and Houston areas.

Seafood—as the restaurant’s name suggests—stars in many of Rockfish’s dishes. The menu features salmon, shrimp, mahi, trout and more served in various cooking styles, Maddock said. But there are also several non-seafood items, such as pasta, barbecued ribs and steak.

Rockfish also features a full bar and a dessert menu. One of the most popular desserts is the bread pudding, Maddock said. It starts with French croissants and a baguette. Eggs, sugar, heavy cream and vanilla are added, and the end result resembles a dense cake doused with a bourbon-butter sauce.

“We have a lot of regulars at Rockfish—a lot of people that come literally two times a week, three times a week,” he said. “So, when we change our menu up a little bit or bring in new items, they get very excited.”

“It is the norm for somebody to drop their fork, look at [me] and say, ‘This is amazing. This is fantastic. How do you do this? That’s why I come here because I can’t duplicate this at home,’” Maddock said.