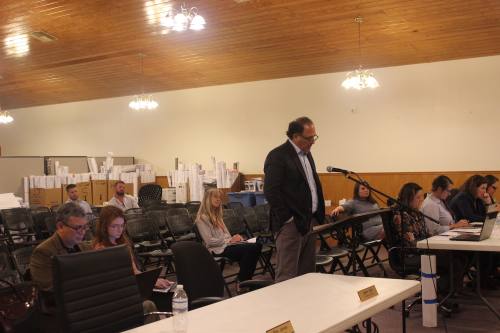 At an Oct. 8 meeting, Dripping Springs City Council opted to again table a vote on various fee waivers associated with Black Ranch, a much-debated wedding venue being developed along Crystal Hills Drive in the Dripping Springs extraterritorial jurisdiction The item addressed a motion filed by an attorney representing Mark Black, the project’s developer, contesting over $12,800 in city fees.

The fees in question largely consisted of consultant fees issued by the city in relation to additional oversight of the project implemented this year.

Despite concerns from local residents, an original site development plan for the project was approved by the city in March 2018. This summer, the city issued a stop work order for the project—which originally consisted of a 300-person wedding venue—upon recognizing that groundwork on the project diverged from the approved site plan. The stop work order was lifted once new plans were submitted. Community Impact Newspaper has requested the new site development plan from the city but has not yet received them.

Kenneth Chaiken, Black’s attorney, argued that the fees were incurred by the city in direct result of the complaints of opposition groups, placing an undue burden on Black.

“We know that the city is bombarded almost every day with communications from groups who oppose the project,” Chaiken said.

Chaiken furthermore alleged that the costs were reaped by the city in the course of “drama [the city has] incurred and [its] staff has occurred on a regular basis.”

Assistant City Attorney Laura Mueller acknowledged that some of the charges did result from complaints and inquiries made by neighbors of the development—an observation she said was communicated to her by City Engineer Chad Gilpin. However, she said that the costs were still considered “to the benefit of a property owner.”

As cited in city documents, Mueller’s official recommendation was that “the appeal of all fees be denied, because the fees were properly charged under [the city’s] ordinances as allowed by state law.”

Mayor Todd Purcell expressed a desire to hear an assessment from Gilpin, who was absent, of whether any of the charges in question were above the normal cost to the developer for a project of this size before making a decision.

Ultimately, the council voted to postpone a decision on Black’s appeal until a meeting on Nov. 12, by which time an assessment by Gilpin and city staff could be coordinated.

The council’s motion to postpone marks the third postponement of the decision, after requests to postpone by Chaiken on behalf of Black in August and September due to scheduling conflicts.