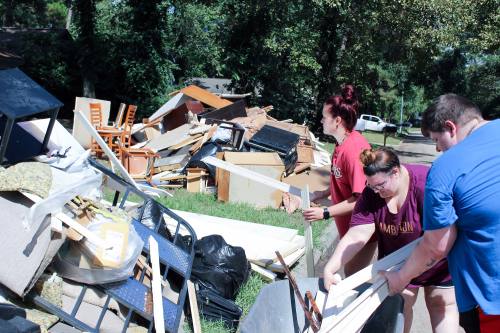 The city of Houston has launched an investigation and filed cease and desist orders against three companies involved in the construction of a Montgomery County residential development that Kingwood residents and some local officials allege caused recent flooding in northeast Kingwood neighborhoods.

The orders allege that sand, silt, sediment and debris were discharged from the construction site into the city of Houston's sewer system during Tropical Depression Imelda on Sept. 19, according to the release. The release stated that this caused damage to the sewer system and to property in the surrounding area, violating Article XII of the city of Houston's discharge ordinance.

According to rain gauge data from the Harris County Flood Warning System, the storm dropped 14-28 inches of rain on the Kingwood, New Caney and Humble areas from Sept. 17-19. Imelda flooded numerous homes, including some that flooded four months earlier in May like Elm Grove Village.

The cease and desist comes months after a civil lawsuit was filed by more than 100 Elm Grove homeowners against the companies after the May flood event. According to court documents filed in Harris County District Court on May 14, the lawsuit alleges that the three companies were negligent and showed “conscious indifference to the rights, safety and welfare of others.”

Negligent actions listed in the suit include failing to allow adequate drainage after construction, failing to have a proper rain event action plan and failing to instruct or train in proper drainage requirements, per court documents.

"Figure Four Partners hires skilled contractors for all phases of its development work, including stormwater discharge prevention. In response to the questions raised about possible discharges during Tropical Storm Imelda, we have not received a citation or cease and desist order from the city of Houston or any other agency," the statement read. "If we receive a citation or anything else, we will of course appear and respond as appropriate. Our experts are tirelessly working to assess and understand the impacts of the flooding caused by Imelda."

Editor's note: This story has been updated with comments from Figure Four Partners.