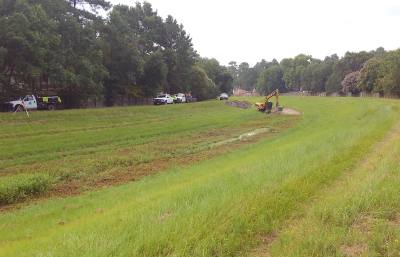 As city and county officials work to mitigate drainage issues in Kingwood, more than 100 area residents are pursuing legal action against a developer that allegedly exacerbated the damages their homes sustained during a heavy rain event in May.

In addition to drainage issues, the Harris County Flood Control District and the city of Houston investigated their respective drainage systems after the May rains and determined the flooding was potentially caused by a Montgomery County development located upstream that sent water into the community of Elm Grove and Taylor Gully in Mills Branch Village, according to the news release.

In a phone interview, Martin said the city of Houston and Harris County are addressing debris and blockage issues on interior drainage ditches and canals in Kingwood to improve the flow of water from the area to the San Jacinto River.

“Neither Harris County Flood Control District, the city of Houston [or] Friendswood Development has done anything [to address drainage] since Kingwood was developed back in the ’70s,” Martin said. “There’s a lot of debris that has been moving through those systems, and some of those systems work, and some don’t.”

In an effort to prevent future instances of flooding and improve drainage in the San Jacinto River watershed, the HCFCD is in the process of evaluating current drainage limitations and work to improve Kingwood-area drainage.

The HCFCD began its project July 15 to desilt sediment buildup at two different points along Taylor Gully to increase the channel’s capacity. Efforts will include reducing the buildup by desilting the channel, installing new gates and signs, and reconstructing parts of the channel to prevent further erosion, HCFCD Deputy Executive Director Matthew Zeve said.

HCFCD officials said the district is expected to finish the project Sept. 21.

Meanwhile, the HCFCD also entered into an interlocal agreement with the Lake Houston Redevelopment Authority and Tax Increment Reinvestment Zone 10 to fund a portion of the general drainage improvements in the Kingwood Area project.

The project, which is funded by Harris County’s $2.5 billion flood infrastructure bond approved in August 2018, will evaluate all the open channels in the Kingwood area and create long-term drainage-improvement projects. TIRZ 10 and HCFCD allocated $100,000 and $600,000, respectively, to fund the engineering investigation portion of the project, Zeve said.

The engineering contract will be brought to Harris County Commissioners Court for approval at the Aug. 13 meeting. If approved, contractors will break ground on the project in September and take six months to determine primary drainage concerns. Zeve said potential alternatives could include widening the channel to carry more water and acquiring property to widen the channel to reduce area flooding.

“We will be evaluating all of the large, open channels in the Kingwood area,” he said. “Once we know the level of service, the consultant will recommend alternatives for areas that don’t have a level of service that meets community expectations.”

Zeve said he expects preliminary drainage solutions to be presented to Kingwood community members in spring 2020. Similar drainage-improvement projects are also scheduled to take place in Atascocita and the Crosby area at an unknown date, Zeve said.

While officials address long-term drainage issues in the Kingwood area, Elm Grove residents are seeking reparations for damages to their homes in May. Two Houston-area law firms are representing more than 100 homeowners across 70 households.

Residents whose homes flooded for the first time in May filed a civil lawsuit against three companies whose activities they allege were negligent and showed “conscious indifference to the rights, safety and welfare of others,” according to court documents filed in Harris County District Court on May 14.

Elm Grove’s homeowners association declined to comment. Figure Four Partners did not provide a statement by press time. This story will be updated with the company's statement if it becomes available.

Court documents state flooding in the neighborhood was caused by developers’ alleged negligence and violation of the Texas Water Code as they worked on a plot of land in Montgomery County just north of the Elm Grove community.

At the time of the flooding, the three companies had allegedly filled in existing creeks and drainage channels during land development, ridding Elm Grove of proper drainage, per court documents. Court documents also claim that, as the plot was cleared, the development was sloped toward Elm Grove, allowing water to flow toward plaintiffs’ homes.

Negligent actions listed in the suit include failing to allow adequate drainage after construction, failing to have a proper rain event action plan and failing to instruct or train in proper drainage requirements. A trial date is set for July 2020, according to court documents.
SHARE THIS STORY