Ask the editor: How hot has Austin been this summer? 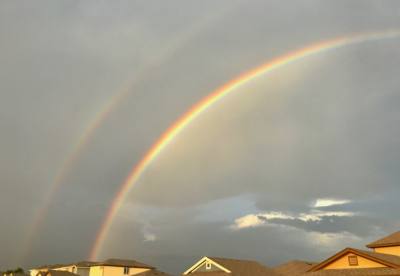 A rainbow spotted after a brief Austin-area rainstorm in September 2019.

According to the National Weather Service office in San Antonio, Austin experienced its seventh-hottest meteorological summer—spanning June 1-Aug. 31—in 2019.

While June and early July saw mild to slightly above-average temperatures, according to the weather service, August 2019 was the second-hottest month ever recorded in Austin, averaging 4.1 degrees above normal, with an average high temperature of 101 through the month. Records from the weather station at Camp Mabry in Central Austin date back to 1897.

Camp Mabry reported 38 days with high temperatures of at least 100 degrees this meteorological summer, and the average high temperature from June-August was 86.3 degrees.

While Camp Mabry only reported 6.35 inches of rain this summer, that amount represented about 74% of the expected amount of rainfall in that span, according to the weather service. That makes 2019 the 52nd-driest summer on record out of the 122 recorded years.

Austin did set a record low on July 25, with a morning temperature of only 63 degrees at Camp Mabry.

Following in August's footsteps, September has also gotten off to a hot start, with 17 of the first 22 days of the month reaching at least 100 degrees. Average high temperatures for September through Sept. 22 were 100.3 degrees, compared to a historic average of 91.7 degrees for the month of September, according to the weather service.


Here’s to hoping cooler weather is on the horizon.