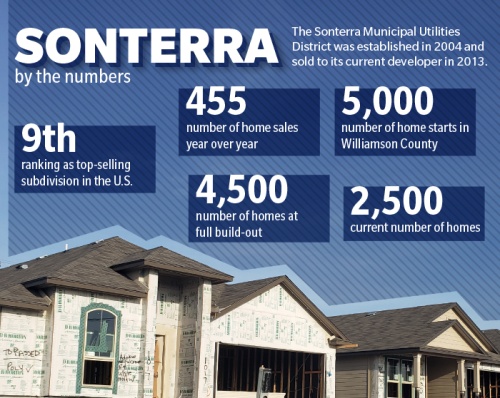 Sonterra was named one of the fastest selling developments in the country.

The Sonterra development, just north of Georgetown in Jarrell, was ranked the No. 9 top-selling subdivision in the United States by RCLCO Real Estate Advisors.

The 2019 mid-year report stated the community had 455 home sales year over year, also making Sonterra the top-selling subdivision in Texas. The next highest-selling Texas subdivision was Bridgeland in the Houston-The Woodlands are at 11th.

Sonterra is a municipal utilities district, or MUD, formed in 2004 and sold to its current developer, SonWest, in 2013, Sonterra MUD board member Thomas Slowbe said.

MUDs are taxing entities that develop land for homes. The MUDs are responsible for infrastructure, such as roads and water, and recoup expenses through taxes. As debt decreases, MUD taxes will also decrease over time, Slowbe said.

“[MUDs are] a way of allowing development to happen without putting the tax burden on a city that is very small and unable to support bringing in homes,” Slowbe said.

The Sonterra development has about 2,500 homes built, with a full build-out of 4,500 homes planned, Slowbe said.

With each of the five builders putting up 20 to 25 homes a month, Slowbe added, in four months’ time, Sonterra could see up to 500 new homes.

Jarrell ISD opened a second elementary school—Igo Elementary—for the 2019-20 school year to accommodate growth. The school is located at 1601 CR 314, Jarrell, just south of the development, and has a student capacity of 800.

Slowbe said Sonterra continues to be an attractive place for people to move because of its location. Sonterra is right off of I-35 with access to Toll 130 and Ronald Reagan Boulevard.

“When a developer comes in, we would want to accomplish connectivity between the neighborhood, so we work very closely with Sonterra  for roadway connections and to make it safer,” Covey said.

Vaike O’Grady, Austin regional director for Metrostudy, keeps track of home development in Central Texas, such as the number of lots that have been put on the ground and the number of homes sold.

Of the approximately 16,000 home starts—homes that began construction—from July 2018 to June 2019 in the Greater Austin area, 5,000 were in Williamson County, O’Grady said.

O’Grady added that Williamson County has seven of the 10 top-selling subdivisions in Central Texas.

“[Growth] is happening partly because Williamson County has invested in transportation,” O’Grady said. “That has made a significant difference for people trying to get in and out of major employment centers.”