Renovations move into next phase at METRO's Northwest Transit Center 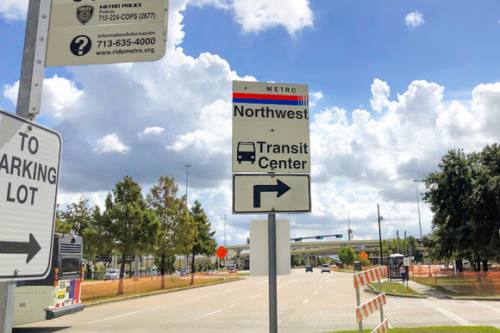 Work is underway on METRO's Northwest Transit Center at Hwy. 290 and Loop 610.

Work on a renovation of the Northwest Transit Center in Houston took a step forward Sept. 3 as crews began construction on the site's main bus platform.

The center—located at the intersection of Loop 610 and Hwy. 290 in Houston—has been undergoing renovations since June that have resulted in several lane and ramp closures.

The project entails building a new ramp at the site, new bus platform and more parking spaces, according to the Metropolitan Transit Authority of Harris County, which operates the facility and is overseeing the renovations. Once completed, the total number of bus bays at the center will increase from 12 to 20, and the number of parking spaces will increase from 120 to 256, according to METRO.

Bus service will still be offered while work on the platform is underway, officials said. Riders will use a temporary platform on the site, and a series of new bus stops have been added along Old Katy Road.

Free shuttles will also continue to be offered to and from shelter stops. The shuttle runs on weekdays from 6-9 a.m. and 3-7 p.m., according to an Aug. 29 METRO release.

Pedestrian crossings have also been established at the site, and a police officer has been assigned to the area from 6 a.m.-6 p.m. to help pedestrians cross Old Katy Road, according to the release.

The Northwest Transit Center serves as a park and ride while also providing sheltered waiting areas where several bus routes converge. Once renovations are completed, the center will also connect to a new Uptown Bus Rapid Transit route being established by METRO.

The $17.9 million project is part of METRO’s 2019 Capital Improvement Program. In a previous interview with Community Impact Newspaper, METRO spokesperson Jackie Gil said construction will be done in phases through late 2020.