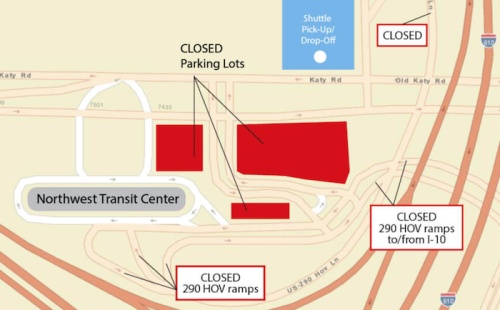 The Metropolitan Transit Authority of Harris County has launched an upgrade project at the Northwest Transit Center, located at Loop 610 and Hwy. 290, that involves building a new ramp, bus platform and more parking.

Buses will remain running throughout the duration of the project, but several lot and ramp closures will go into effect over the next few weeks, METRO spokesperson Jackie Gil said.

Construction will be done in phases, but Gil said specifics on when certain phases will stop and start was not immediately available. METRO plans to announce when lots or ramps could reopen as work progresses, she said.

"We will be altering people ahead of time when we will be opening ramps and when construction will be completed on certain phases," she said.

Once completed, the center will also connect to a new Uptown Bus Rapid Transit route.

The $17.9 million project is part of METRO's 2019 Capital Improvement Program. The center previously featured 120 parking spaces and 12 bus bays. The project will add roughly 250 spaces and increase the number of bus bays to 20.

The project also involves completing sidewalks to bring the transit center in line with the Americans with Disabilities Act, Gil said. The entire project is slated to be complete by December 2020.