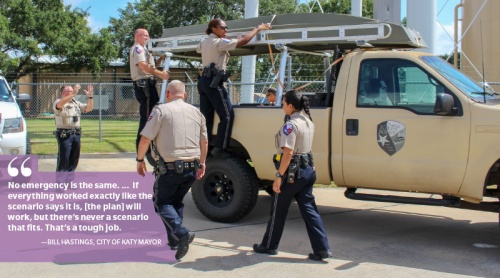 The Katy Police Department added one high-water vehicle and a boat to its rescue equipment after Hurricane Harvey.

Editor’s note: This is the first article of a multipart series about the two-year anniversary of Hurricane Harvey.

Since Hurricane Harvey devastated the Greater Houston area in August 2017, Katy-area governments have improved their emergency preparedness for the next big flood.

Harris, Fort Bend and Waller counties as well as the cities of Katy and Fulshear have trained staff to use newly acquired equipment, such as high-water vehicles and swift-water boats, to help save more people in the event of a future flood.

“Were there some things that could have been done better during Harvey? Probably,” said Katy Mayor Bill Hastings, who was Katy’s police chief during Harvey. “It’s a hard thing to judge because no emergency is the same. ...If everything worked exactly the way the scenario says it is, [the plan] will work, but there’s never a scenario that fits.”

Greg Goedecker, head of the city of Katy’s Office of Emergency Management, or OEM, said one of the biggest issues during Harvey was the lack of resources for rescue operations.

After Harvey, the Katy Fire Department bought a surplus military vehicle, a steel boat and swift-water boat, Hastings said. The Katy Public Works Department also upgraded a Chevrolet Tahoe to enable it to travel through deep waters for KPD.

Although Fulshear did not flood as much as other cities during Harvey, it has since equipped itself to help if another hurricane strikes, Fulshear police Capt. Mike McCoy said.

“We wanted to help areas that flooded heavily and didn’t have a lot of resources,” he said. “We depended on everybody else’s high-water vehicles and airboats because we didn’t have those tools.”

Fulshear acquired one hovercraft—a craft capable of traveling over land, water, mud and ice—as well as accepted donations for an airboat and a high-water rescue vehicle, he said. The city subsequently trained six officers to operate the gear and created a combined position for Sgt. Felix Vargas, who assumed a role as the OEM coordinator.

Waller County has doubled the number of rescue boats to eight since Harvey and added three high-water rescue vehicles to its existing four prior to the storm, Cantrell said.

After Harvey, the department purchased about eight rubber boats and two high-water vehicles and now trains personnel to use them.

Mark Flathouse, Fort Bend County’s emergency management coordinator and fire marshal, said the OEM maintains an asset sheet for different emergencies with resources, including boats, high-water vehicles, hovercrafts and fire trucks, that could be used throughout the county in case of an emergency. At least eight to 10 high-water vehicles were acquired by different cities or fire departments throughout the county since Harvey.

Fort Bend County Judge KP George, who took office in January, said the county is also working on the AMBUS Project, a specialty vehicle designed by the Texas Department of State Health Services to help with mass transport of the sick and injured as well as responders in a variety of emergency situations.

“During Harvey I sat in the emergency operations center for nine days straight,” Flathouse said. “We did everything we could at the time, but now … across the region we are better prepared.”

Waller County Judge Trey Duhon said the goal of the OEM is to provide the best emergency service to residents through coordination, proper planning, training, and exercises for first responders and the community.

HCESD 48 has also made efforts to increase training. The department  partnered with a waterskiing neighborhood with a lake in Katy, where paid staff are allowed to train in water rescue and obtain a certification. The district also partnered with Morton Ranch High School, where staff can complete the first part of a water safety test in the school’s Olympic-style pool.

VanDyk said trainees then move on to complete the open-waters portion of the certification, where they learn a range of skills, including how to rescue a floating victim.

George said he agrees that training employees and staff is essential, and residents who would want to learn how to help their communities during an emergency should join the Community Emergency Response Team, a program for citizens to better train themselves for emergencies.

CERT programs are formed by members of a neighborhood  and are typically affiliated or created in partnership with a local fire department, law enforcement agency or emergency agency.

There are two CERT groups in the Katy area overseen by Fort Bend County and HCESD 48, which has stepped up its CERT program to help residents become more prepared for the next storm, VanDyk said.

“We’re more likely to benefit from someone if they are part of the CERT team because we know they have spent eight weeks with us,” VanDyk said.

Harris, Waller and Fort Bend counties as well as the city of Katy have all enhanced their alert systems after Hurricane Harvey to ensure better communication with the community during an emergency.

George said having an alert system capable of sending texts and push notifications is preferable to a system solely relying on email because less than 20% of emails are opened and over 98% of text messages are looked at.

FB County Alerts was tied to the National Weather Service in January and is now self-automated, Flathouse said.

“If something happens at 2 a.m., I’m asleep. The notification will go out without needing my authorization, which will save time,” he said.

Cantrell said social media is the most efficient avenue for local leaders to distribute timely emergency notifications, and they should be sent well before potential high waters begin to allow residents time to prepare.


The next big storm

The Atlantic hurricane season started June 1 and runs until Nov. 30, according to the NSW.

“As we move into the peak of hurricane season, we remind residents that it only takes one storm to devastate a community,” said Mark Sloan, Harris County’s emergency management coordinator.

Harris County’s proximity to the Gulf makes it vulnerable to tropical storms, but more recently, flash flooding and other hazards have become more prevalent to the area, according to the 2018 Harris County Office of Homeland Security & Emergency Management report.

Lessons learned from every event help the county incorporate improvements within its communities, according to the report.

“We never know when the next storm will be,” said Cory Stottlemyer, Harris County public information officer. “We are trying to plan ahead, so we come up with scenarios to find our strengths and where we can improve.”

George and Flathouse said they agree everyone should understand the role of the county and all its processes during an emergency.

“Harvey was a rain event,” Flathouse said. “The next hurricane could be a wind event, where it takes roofs off homes or a hurricane with tornadoes that destroy our roads. Every emergency is different, and it is my job to make sure we have the plans to take care of that.”