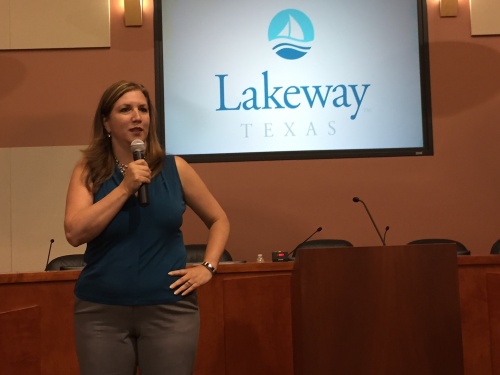 A first for the city of Lakeway, the Aug. 1 address from City Hall was also broadcast through social media on the Facebook Live platform.

Cox kicked off the address talking about the city's budget and tax rate, discussing the process by which officials work to establish those figures, set to be adopted Sept. 30.

"We haven't decided anything at this point. That's what's coming Aug. 12 and Aug. 26," Cox said regarding adoption of the city's tax rate. "My hope is that when we get to the Aug. 12 meeting, we will be very close."

Cox added the city could zero in on Lakeway's tax rate for fiscal year 2019-20 by City Council's Aug. 26 meeting. She said in spite of fiscal snags, such as rising operating costs brought on by the new $23 million Lakeway Police Department building, officials have worked hard to stay within Lakeway's effective tax rate, or the rate that would yield the city the same tax revenue as the previous fiscal year.

"We are really working to address [traffic and needed road projects] because we have really gotten behind on growth and infrastructure," Cox said, adding as Lakeway continues to grow, the thoroughfare Lakeway Boulevard is primed to become a major cut-through for drivers—a possibility the city needs to avoid.

There are difficult decisions officials will have to make based on prioritized projects that will emerge from the study, she said, but the creation of a new transportation steering committee along with help from civil engineering firm Huitt-Zollars will help City Council meet deadlines levied by the pursuit of a May 2020 bond.

Finally, Cox touched on Lakeway's comprehensive plan, which is set to be completed by December. The study aims to set the city's goals for the next 20 years.

The city's parks, culture and mobility have all been major considerations for the Lakeway Comprehensive Plan Steering Committee as it completes its report, Cox said.

"We have a lot more work to be done, but the whole goal here is to have a vision, have a strategy and have the financial means to put it all together," Cox said.
SHARE THIS STORY