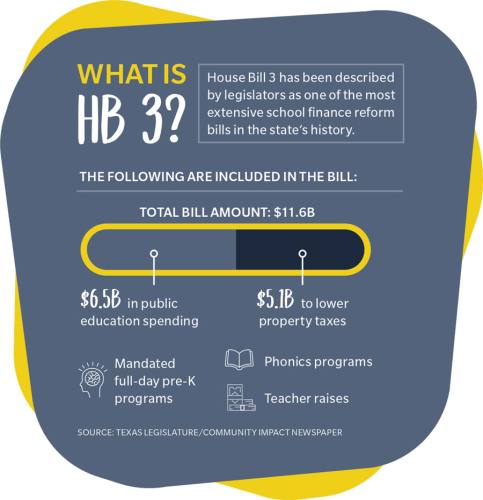 House Bill 3 has been described by legislators as one of the most extensive school finance reform bills in the stateu2019s history. The district primarily plans on using the increased state funding, up from 38% to 45%, in the next biennium for higher teacher wages and full-day pre-K programs, both mandated in the bill. However, school officials said facilities may have to be expanded to adjust to the pre-K requirements for students.

“It’s a historic legislative effort on behalf of public schools, our teachers and education reform going forward,” Creighton said. “It’s incredible. It not only pays our teachers more, [but] it [also] directs more state dollars directly to the classroom and increases the state’s share of public education.”

Of the $11.6 billion of reform dollars across the state, $6.5 billion is going to improve public education.

Creighton said the percentage of public school districts’ funding from the state—which has declined in recent years—is increasing from 38% to 45%.

The portion of state funding which makes up overall revenue in CISD has decreased several times since 2014. Texas Education Agency financial reports show state funding decreased from $154.8 million in 2015 to $131.5 million budgeted for 2018-19—a decrease from 34.9% to 26.2% of total district funding.

Information from CISD indicates the school district will receive an additional $22.9 million from HB 3 in foundational school program funding, which includes staff raises.

Schools are required to use 30% of their increased education funding for salary increases. Of the salary increases, 75% must go to teachers, nurses, counselors and librarians.

During the CISD board of trustees June 19 meeting, the board unanimously agreed to a 3% raise for administrators and a 3.5% raise for all other employees. Teachers with six or more years of experience will also receive a $500 stipend.

The raises and stipends will take effect for the 2019-20 academic year.

Following staff raises, Rice said the district will have an additional $6.54 million from HB 3 remaining, which will be put to use in the 2020 budget.

Creighton said the increased funding to public education was made possible by the oil and gas industry’s recent boom, resulting in a $9 billion revenue surplus available to the state.

“It’s no coincidence we committed an additional $11 billion to schools following that surplus,” he said. “We even went above and beyond what the surplus was.”

Because of the sweeping changes, however, there are concerns with how the state will be able to keep the funding sustained in future years, particularly in regard to pre-K programs.

“These are all things the state of Texas will institute and just watch. … A few sessions from now, none of it will be funded,” said state Rep. Steven Toth, R-The Woodlands. “The mandate comes with funding, and in a few years the funding goes away.”

Creighton said sustaining changes implemented by HB 3 will be dependent on the revenue available.

“When revenue is strong, our commitment will always be to public schools and the best education environment we can provide,” Creighton said. “When our revenue is down, just like every household has to tighten its belt, we have to do the same because we’re under a constitutional mandate to balance our budget.”

Along with teacher raises, HB 3 increased the basic funding allotment per student from $5,140 to $6,030 and cut the amount of funding districts contribute to the state’s recapture program, also known as the “Robin Hood” program. Recapture takes funds from wealthier districts and uses the money to fund poorer districts from around the state.

Creighton said districts will have to contribute 47% less to the recapture program in the next biennium.

TEA data indicates CISD has not been the subject of recapture. However, Tomball ISD, which has several schools in the Village of Creekside Park, will see benefits from the recapture reduction. The district’s recapture costs for the 2018-19 year dropped from $3.1 million to an estimated $2.1 million for the 2019-2020 school year.

The demands of full-day pre-K could create a new influx of students into the district, CISD officials said. So many, in fact, Rice said the district is considering building a new school to house them.

Currently, CISD has a total of 45 classrooms that provide half-day pre-K programs in the morning and afternoon for 1,468 students in the upcoming year.

“For us to go full-day, we would have to add an equivalent of roughly a new elementary school,” Rice said. “We figure that once we offer full-day pre-K, more people will be joining the program that are eligible. It’s going to be a large impact on us.”

Rice said the idea of building a pre-K academy is being taken under consideration. While no plans have been officially announced, he said having the academy in the Conroe area would be more likely, as The Woodlands and Oak Ridge North feeder zones are more spread out. Before moving forward to build a new school though, CISD is required to ask if there are other providers, such as day care facilities commissioned by the state, that can provide the space.

The rough estimate of the cost of building a new elementary school is around $35 million, Rice said.

Schools have access to two vouchers, each for three years, from TEA to delay facility construction. CISD has already indicated it plans to use at least one of those vouchers.

Rice said the district is developing a pilot program for full-day pre-K around the district to build a curriculum for the students and determine how it will affect transportation. CISD Director of Communications Sarah Blakelock confirmed the pilot program will be at two campuses this fall, but as of press time was unable to confirm where.

Rice said the full-day programs are anticipated to be easier for families to manage, as parents will not have to schedule a time to have their students picked up or dropped off at the school.

Toth, who voted in favor of HB 3, said while he sees the benefit the full-day programs will bring to families, he was personally against this part of the bill.

“I strongly believe the government coming in and taking over pre-K is not an ideal situation,” Toth said.

Creighton said mandating full-day pre-K programs is a controversial topic among stakeholders in the education world due to data indicating mixed results.

“I think what we will see in the pre-K provision is that we want to understand the data,” Creighton said. “We want the school districts to measure it in a way that is very easy to discern. … In future sessions, we can re-evaluate it and continue it if it’s working.”

School officials, teachers and staff are not the only ones affected by HB 3. Additionally, property taxes will drop for local taxpayers. Creighton said school district property tax rates will decrease the next two years with an average drop of $.08 per $100 valuation across the state in 2020 and $0.13 in 2021.

Toth said the cost of the property tax reduction aspect of HB 3 is around $5.1 billion, and it is the largest amount the state has ever provided.

In addition to HB 3, the Legislature also approved Senate Bill 2, which is dedicated to the state’s property tax system. Creighton said the bill has a provision requiring cities and counties to hold an election if they want to raise property tax revenue generated more than 3.5% than the previous year.

The limit for schools is 2.5%, which Rice said raises concerns with maintaining the teacher raises.

“If our revenue is capped to 2.5% ... will we ever be able to give teachers a raise again?” Rice said. “Ninety percent of our budget is salaries. We’re a people-intensive organization. … Will we be able to provide a cost-of-living increase to our teachers?”

Rice said CISD still has questions moving past the next two years, but he is confident in the district’s ability to adapt due to previous boards being conservative with CISD’s budget.

Creighton said he believes the rest of the country will be keeping an eye on what Texas has done with school financing.

“I think overall it’s a win for public schools,” he said. “I think it will be a national model for reforms and initiatives. Our parents, our families and our community will really appreciate it as we take our Texas public schools to the next level.”