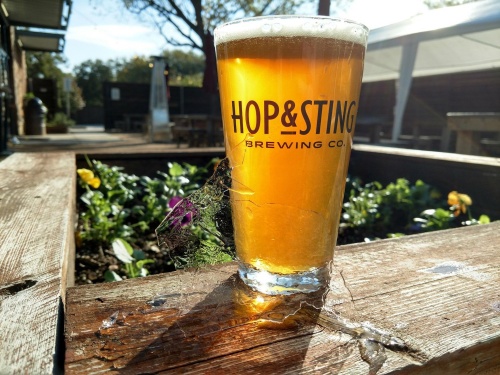 Breweries across the state collectively raised a glass after a new law was signed by the governor, giving them a chance to sell canned beer to-go on-premises.

On June 15, Gov. Greg Abbott signed House Bill 1545, a piece of legislation that allows breweries to sell packaged beer to-go from their taprooms.

Grapevine Craft Brewery opened as the first brewery and taproom in Grapevine in 2014. Four years later, the business was sold, and Hop & Sting Brewing Co. held the keys to the city’s brewery. The former owner told Community Impact Newspaper that selling beer to-go from the taproom would have made a difference in the brewery's business. After the sale, the brewery continued to receive calls from customers asking if they could purchase beer to-go, Hop & String Brewing Co. owner Jon Powell said. Now, he and his partners can tell them yes.

"We are extremely excited to have the new law in place," Powell said in an email.

He said the law allows the brewery to sell a wider variety of beer in cans. Two of Hop & Sting's beers rotate each month, and proceeds from those beers are donated to charity.

"We now can justify brewing larger quantities of these beers and packaging them to go, which will A) give our customers even more variety to take home and B) give our charities more donations," he said.

"Us brewers are going to have a lot of fun making beers that may not be as popular as IPAs and Stouts but are just as great, and now we have a viable outlet to get those beers to our customers," Powell said.

There are still limitations that come with the new law. Hop & String can only sell 24 12-ounce cans per person per day. Powell said he would have liked to have also had the ability to sell a customer a keg of beer to go. Besides that, he said he is pleased with how lawmakers made changes regarding the state's brewery laws.
SHARE THIS STORY