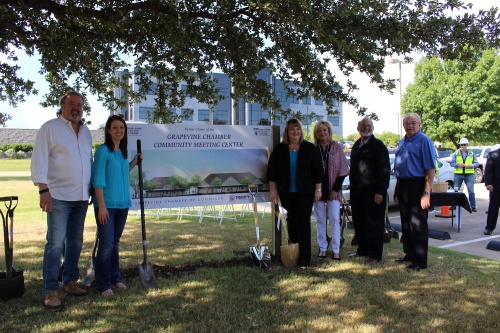 The Grapevine Chamber celebrated the groundbreaking of the new chamber building June 13.

The Grapevine Chamber of Commerce expansion is officially underway.

Grapevine Chamber members and officials turned out the morning of June 13 to break ground on the site of the chamber expansion project. The project would remodel the current Chamber of Commerce building in addition to building a new 4,000 square-foot facility of meeting space adjacent to the current building.

The remodeling will enable the chamber to not only house its current staff, but also provide space for the chamber to grow in the future, Building Campaign Chair Theresa Mason said as she addressed the crowd gathered June 13.

"The big change is the new 4,000-square-foot facility that will include about 2,300 square feet of our new Grapevine chamber community meeting center where I'm standing right now," she said. "It will finally allow us to have all of our committees meet in the chamber, as several of them have outgrown this space. But it will also provide space for our member businesses and others to hold meetings, seminars and trainings, both now and in the future."

In April the chamber announced a fundraising campaign to raise money for the project. At the groundbreaking Mason announced that with 70 donors $339,625 has been raised to date. The chamber will continue to seek campaign pledges to meet its $1.5 million goal. Mason said she expected the project to be built by the end of the year.

"We feel like [the project] is a great value add for our business members," she said.

For more information or to donate to the project, contact the Grapevine Chamber of Commerce at 817-481-1522.
SHARE THIS STORY