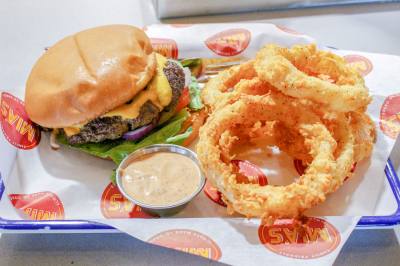 The restaurant offers its signature cheeseburger and onion rings. To native Houstonian and restaurateur Johnny Carrabba, putting his name on a business is a point of pride. In his own words, it helps keep him grounded.

When it comes to Mia’s Table, named after his only daughter, Carrabba said having the name and reminder on the building makes him work harder.

“I never want to go to Mia and say, ‘Hey guess what, Mia’s didn’t work out,’” he said. “It gets me to work a little harder and stay focused.”

The original Mia’s Table opened on Kirby Drive in Houston six years ago after Carrabba said he had difficulty finding a good burger, and he had land ready to develop near his original Italian restaurant.

Before he got into the burger business, however, he said other places, such as Hopdoddy and Smashburger, started coming into the area. Because of this, Carrabba said he feared oversaturating the market with yet another burger restaurant, and he instead shifted the focus to an old-fashioned, Southern-comfort style.

“It’s good comfort food, and I have to say it’s very family-oriented,” Carrabba said. “I think what impresses me the most about this restaurant is I see a lot of grandparents coming in with their grandkids and saying, ‘This is the kind of milkshake or burger I grew up with.’ I think it’s a throwback restaurant.”

According to Carrabba, each menu item is prepared fresh daily, such as grinding fresh meat for the burgers or filleting red snapper for tacos. He said a simple cheeseburger is his favorite item on the menu.

Drew Dalabakis, Carrabba’s business partner of 15 years and the regional manager, said none of the food in the restaurant is premade.

“That’s part of our commitment, too, is that it’s real food, and it’s fresh,” he said. “It’s labor-intense, but … people here love this food.”

Mia’s Table also offers free custard to every customer that walks through the door.

What sets Mia’s Table apart from other ventures, according to Carrabba, is the heart and soul behind the team working there.

“We’ve made a commitment to [operating locally],” he said. “We made the decision to be family-owned, neighborhood restaurants.”

Carrabba said he comes from a family of local business owners, with his grandparents owning and running a grocery store before his parents later bought it from them.

“My family is the most important thing to me, and not just my immediate family, but my restaurant family too,” Carrabba said.

While the original Mia’s Table has been operating for six years in Houston, the business opened a branch in Shenandoah in 2018. The decision to expand north, Carrabba said, came from wanting to be part of The Woodlands-area community.

“I’m a native Houstonian. I’ve seen this area just grow,” Carrabba said. “I listen to people. We listen to customers. … If they say it’s salty, it’s salty, we don’t argue. The customers were saying, ‘Johnny, we would love to have something in this area.’ I love The Woodlands. Shenandoah has been really good to us; this whole area has been good.”

The Shenandoah branch of Mia’s Table was the first major expansion for the business. To date, it is only one of three, with the latest recently opening in the Bay Area.

While Carrabba said it might have been more practical to put it closer to his store in the I-10 corridor for the name recognition, he liked The Woodlands area too much to pass it up.

“We opened up out here without notoriety,” he said. “That’s what I’m kind of excited about.”

Dalabakis said some customers come into the store without even knowing what kind of food Mia’s Table serves.

“The response from the people has been great,” he said.