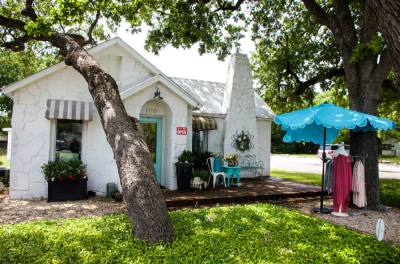 The mother-daughter ownership team at Urban Cottage turned a one-story white cottage into a retail storefront.

But in 2017, after McGraw sold her business in Seattle and packed up her remaining inventory and moved to Texas to be closer to McGraw-Horton and other family members, the mother-daughter team decided to start a new venture as partners.

“We’ve kind of always wanted to do a retail business together,” McGraw said.

Urban Cottage sells a mix of new and antique items, including clothing, jewelry and accessories as well as furniture and home decor. The shop emphasizes product lines made by Texas-based producers as well as women entrepreneurs.

“It was always a dream to do something together, and we were so many miles apart, and it was just like, ‘Gosh, it’s too bad we’re not closer,’” McGraw-Horton said. “Then when she moved here and brought her stuff, we just started to talk about it.”

After initial difficulty finding affordable commercial space, McGraw-Horton and McGraw found a one-story, white cottage on Williams Drive and worked out a rental agreement with its owner.

The cottage’s location, which is set back several hundred feet from the busy Williams throughway, presents a challenge to visibility and available spots for signs, McGraw-Horton said.

They have tried to remedy that by setting up colorful furniture and hanging string lights in the outdoor space near the shop’s front entrance.  McGraw said they also hope to use the cottage’s backyard space for future outdoor events.

“We just thought it was so charming,” McGraw-Horton said about the cottage. “It matched our aesthetic and the kind of stuff we were going to sell.”
SHARE THIS STORY

The event will include family-fun activities as well as chances to meet the pediatricians and tour the clinic.

Tosha Vanmetre has worked in various positions in Georgetown and Manor ISDs.

The District 6 representative cited multiple reasons in a June 7 video posted to Facebook.

The shelters have teamed up to help with an overflow of adoptable dogs and cats.