support local journalismbecome a community patronCommunity impact Newspaper's mission is to build communities of informed citizens and thriving businesses through the collaboration of a passionate team. Consider supporting our journalism efforts by becoming a Community Patron today.
Continue Readingcontribute today
sign up for our newsletterbecome a community memberCommunity Members have access to our e-edition and can sign up for our daily e-newsletter
Already a Member?Sign in
Sign up now
Business 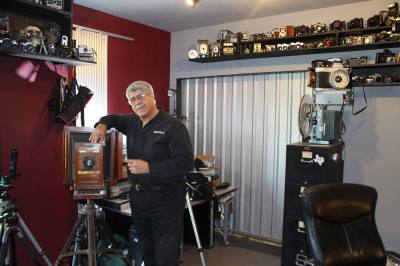 Vic Cherubini, president and founder of Epic Software Group and the Epic Creative Co-op, stands alongside a portion of his camera collection. From a scenic wooded lot tucked behind a Sawdust Road business park, Epic Creative Co-op offers production, photography and animation options for clients in The Woodlands area and across the country.

The co-op is anchored by its first business, Epic Software Group, which started nearly 30 years ago. Epic president and founder Vic Cherubini has since incorporated the company’s focus on graphic production with his broader goal of a creative cooperative based near I-45 on Sawdust Road.

Cherubini, who first conceived the idea for a tech company while pursuing an MBA at the University of Houston, formed Epic Software in 1990 to accommodate businesses’ growing needs in the digital age. He recalled an uncertain start for the software company as he struggled to find an audience.

“The first three years were really, really tough. Like any business, you’re trying to get the rocket off the ground,” he said. “Then in ’94, ’95, the internet [commercialized], and all of a sudden our business just exploded.”

Epic’s first large contract provided the funds needed to purchase 4 acres of property in 1999, and the group opened its offices there in 2000. Cherubini first cultivated clients in the oil and gas fields using his background in industrial sales, then expanded Epic’s content production for enterprises as varied as 3M, ExxonMobil, Compaq, Dr Pepper, General Electric and CBS over nearly 20 years at the Spring headquarters.

In 2009, a new building was constructed on the Spring property for longtime Epic companions Silver Rock Productions. Silver Rock’s services include animation and photo and video work, including shoots in its full-size studio space.

“We have the largest video production studio in Montgomery County,” Cherubini said.

As part of his community-centered approach, the space has hosted live television shoots for locals such as U.S. Rep. Kevin Brady, while Silver Rock has partnered with local ventures such as The Woodlands Township and Visit The Woodlands.

Epic also allows the use of its forested back lot for isolated shoots by individual photographers and movie productions. Cherubini now lists the outdoor space on the booking service Peerspace, where he plans to offer rentals of Epic and Silver Rock’s studios for photo and video work as well.

Cherubini said he hopes to maintain unique workspace options for local artists and smaller companies at the Spring facility. He plans to build a third building on the property to house an additional workspace for local creatives and to continue fostering community members through Epic’s resources.

“My vision was to build a creative co-op where artists, photographers, writers, software developers and others could work in a nontraditional space to make wonderful things happen,” Cherubini said. “Although I have contracted Epic [Software] in size, the Epic Creative Co-op continues to grow.”

Growing Together Early Learning Center in The Woodlands closes

According to the business's Facebook, the day care had been in the area for 17 years.

Bulls & Bellows is a veteran-owned business offering craft barbecue and side dishes made from family recipes.