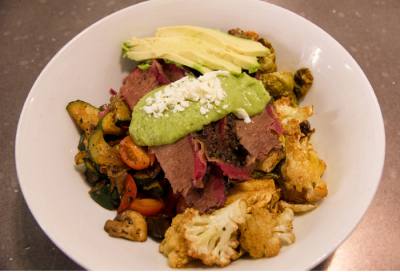 Greenhouse Craft Food was one of many restaurant concepts developed by chef and owner Rob Snow as he worked his way through the culinary industry, but the idea for the restaurant’s “casual farm-to-table” dining theme was always a key focus, he said.

“We wanted it to sound fresh,” Snow said. “We wanted people to know everything was handmade.”

The Georgetown location of Greenhouse Craft Food opened in November on the Square. Greenhouse also operates its original location in Round Rock that opened in 2013 on East Old Settlers Boulevard just east of I-35.

Greenhouse in Georgetown serves lunch, dinner and weekend brunch menus as well as beer and wine. The Georgetown location offers similar items to the Greenhouse restaurant in Round Rock but also features unique dishes, such as crispy smoked ribs, brisket enchiladas and smoked meatloaf.

The Georgetown location also hosts monthly beer- and wine-pairing dinners. The events, which are available for booking by reservation, can draw up to 60 people, he said.

Snow got his start in the restaurant industry while he and his wife lived in Las Vegas.

After culinary school, Snow worked in the Bellagio on the Las Vegas Strip before he and his wife moved to Central Texas in 2008. He found work as a chef in several restaurants in Austin before deciding to develop his own concept.

“I just had a feeling from the beginning that the way people wanted to eat was always going to be more casual [and] less intimidating,” Snow said.

Snow said the Georgetown location benefits from the reputation and name recognition of the original restaurant in Round Rock. He added that being on the Square has been a boost to business during the restaurant’s initial months.

“I’ve been really impressed with the town as far as the support goes,” Snow said. “Everyone wanted us here when we came here, which was great.”
SHARE THIS STORY

The zoning changes could allow for more houses in Sun City and a new subdivision.

YMCA officials are proposing the city join in a partnership with Georgetown ISD to construct a new recreation facility.

The proposed amendment could add term limits for council members and the mayor.

The event will include family-fun activities as well as chances to meet the pediatricians and tour the clinic.

Tosha Vanmetre has worked in various positions in Georgetown and Manor ISDs.

The District 6 representative cited multiple reasons in a June 7 video posted to Facebook.