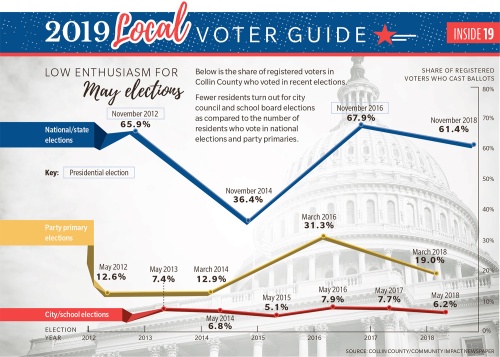 When deciding the issues that most affect McKinney residents’ everyday lives—from street repair to new schools—voters arguably get the most bang for their buck in local elections.

In May, McKinney residents will vote to fill three City Council seats: District 2, District 4 and an at large seat. Residents will also vote on five city bond propositions and two charter amendments.

But only a small share of McKinney residents who are registered to vote will actually cast ballots in the May 4 election, if history is any indication. And those who do vote will not closely resemble the general voting-age population, research shows.

This can have a profound impact on the nature of representation at the ground level of local government, said Cal Jillson, a political scientist at Southern Methodist University. Low turnout also means that an organized group can have a greater influence on the direction of their city or school district even if their numbers are small, he said.

“Those groups are welcome to turn out,” Jillson said. “They generally watch [local politics] more closely than the average voter. But at the end of the day, if the issue is, ‘Is a single-digit, mid-teen [percentage] … turnout a sufficient democratic foundation for local government?’ I think the answer is probably no.”

In May 2017, 12 percent of voters turned out to elect McKinney’s mayor and three council members. But that level of participation is not the norm. Voter turnout in three of the last five city of McKinney elections was between 4 percent and 9 percent, according to Collin County data.

In a 2016 study by Portland State University, researchers found that municipal election turnout in 10 of America’s 30 largest cities was lower than 15 percent. More than half of voters in local elections in 50 major U.S. cities were age 57 or older—nearly a generation older than the median age of all eligible voters, according to the study.

The study also found that voter turnout tends to fluctuate from neighborhood to neighborhood, with a significant number of residents living in what the study referred to as “voting deserts.” Turnout in these voting deserts was lower than half the city average.

There is a relatively simple way to improve voter participation in local elections: hold them at the same time as statewide and national races, Jillson said. While this approach would almost certainly increase turnout, it would come with its own set of problems, he said.

City and school board races are often intended to be nonpartisan. But a large number of voters are driven by their affiliation with a major political party, Jillson said.

“The reason that municipal elections are held off of the major election cycle … is that they want voters—even if the number of voters are small—to be focused on local issues,” Jillson said.

That means McKinney candidates this year will focus more on the nearly 11,400 voters who cast ballots in May 2017 as compared to the more than 94,000 other registered voters who declined to show up.

But only a small number of people vote regularly, research shows. Those who vote less frequently often show up to vote against somebody or because a friend or relative is running, Ussery said.

“Locally elected officials live in the communities in which they serve,” she said. “I think [these officials] have their ears to the ground regarding their constituents, specifically the candidates that represent specific districts. I mean, it makes sense that you can best speak to a subject or an issue with a constituent in an area which you live.”

McKinney City Council is made up of four single-member districts and three at large seats, including the mayor.

Rath’s term on City Council expires in May. She is not seeking re-election, but three candidates will vie for her seat.

These groups sometimes view local office as a stepping stone to higher office, Gamble said. These positions are also viewed as a resume booster for a later run for another office.

”I’ve heard a lot from these smaller, very policy-driven groups ... that they feel that local office is a training ground,” Gamble said.

The voters that turn out in municipal elections oftentimes will know the history of the candidates, and they know that they came out of one party or the other into this nonpartisan electoral arena,” Jillson said.

Ussery said he reached his own conclusion when it comes to voter turnout.

But people should not be complacent, he said, adding, “Everybody has a duty to vote.”