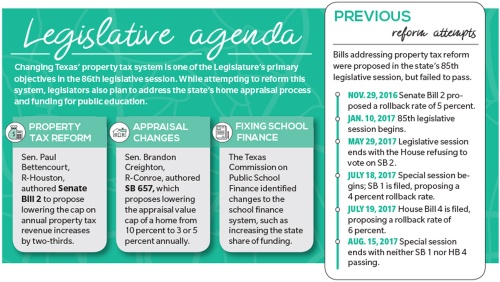 Changing Texasu2019 property tax system is one of the Legislatureu2019s primary objectives in the 86th legislative session. While attempting to reform this system, legislators also plan to address the stateu2019s home appraisal process and funding for public education. Property tax reform has been a top priority for Texas lawmakers from the start of the 86th legislative session. The early filing of identical, wide-reaching bills in the House and Senate in January—Senate Bill 2 and House Bill 2—sparked debate on the topic and earned pushback from many local entities that could be affected by the proposals.

The twin bills propose to lower the cap for local entities’ annual tax revenue growth from 8 percent to 2.5 percent and to improve efficiency and transparency in the tax system. The proposals were fast-tracked for debate in both chambers after Gov. Greg Abbott declared property tax an emergency item in February, and dozens of related bills have been filed in their wake.

However, officials with local taxing entities, such as The Woodlands Township, say they are already managing annual tax increases responsibly in their jurisdictions and attributed much of their residents’ rising tax bills to higher appraisal values. Regardless of their stances on SB 2 and HB 2, many state and local officials said they are hopeful for progress on the topic this year.

Entities that depend on property taxes to operate could have their growth limited if some form of SB 2 and HB 2 become law. A main point of the reform bills is a 2.5 percent cap on annual increases in revenue from taxes on existing properties; a levy above that limit would require voter approval to pass. Existing law has that cap set at 8 percent, and exceeding it would not automatically trigger an election. A similar bill filed in 2017 with a 4 percent cap failed to become law.

Bennett Sandlin, executive director of the Texas Municipal League, a city-focused interest group, said the proposed cap was punitively low compared with the previous plans and would not allow cities to keep up with inflation and maintain a healthy payroll.

“[A cap of] 2.5 [percent] is so egregiously low that services are automatically going to fall behind,” he said.

On the other side, lawmakers such as state Sen. Paul Bettencourt, R-Houston, the author of SB 2, said a 2.5 percent revenue cap will only benefit taxpayers by limiting the amount that taxing entities can collect. But with that cap level and other content of the bills still up for debate, the effect of the proposals on those entities—especially school districts, which typically carry high tax rates—is still uncertain.

Officials in The Woodlands area said while taxing limits of some sort may be needed, their own tax rates have held steady or even decreased in recent years, and factors, such as property appraisals, have led to growing bills.

“I don’t think that having a cap at the township level is going to provide any meaningful property tax relief to our residents because we already manage better than the proposal,” said Gordy Bunch, chairman of The Woodlands Township board of directors. “The only way my constituents are going to see substantial offsetting costs is managing the appraisal tax increases.”

“Those incremental increases of taxable values have driven up their costs of home ownership, and their total tax bill is now substantially higher than it was a decade ago,” Bunch said of his constituents.

Other entities with less dramatic rate changes have seen appraisals’ effect on taxes spike. Montgomery County tax rates dropped by around 3.5 percent from FY 2013-14 to FY 2017-18, while the average home appraisal jumped more than 20 percent.

In a February community meeting, Montgomery County Judge Mark Keough noted the effects of appraisals within his jurisdiction.

“The fact of the matter is if you have a bill that doesn’t address appraisals, it’s not going to impact Montgomery County,” he said.

Property valuations can grow considerably year to year, and are conducted by the county appraisal district and based on a combination of broad local classification data and individual property characteristics, according to the district’s website.

Toth also called to restrain the appraisal district’s valuations and budget, noting that dramatic appraisal increases often do not match the market values of homes.

“All told, $26 million per biennium is spent funding this appraisal district that doesn’t do anything,” Toth said. “It doesn’t provide any service that people benefit from; it just raises the value of your home.”

The main pair of bills also do not spell out what financial effects on school districts might be, and an expected update to the state’s school finance formula has not yet been introduced.

“We’re waiting anxiously for the language to come out,” said Darrin Rice, Conroe ISD’s chief financial officer. “When that comes out ... we’ll have a very good idea of where it’s kind of all going to shake out.”

The state requires education costs be covered through a per-student funding formula, paid by a combination of district taxes and state money. While CISD collects taxes at the highest rate of all local entities, $1.28 per $100 in recent years, rising property values have increased the district’s share of funding obligations for its students.

By early March, SB 2 had passed through the Senate Property Tax Committee and HB 2 was left pending after a hearing in the House Ways and Means Committee. Per The Texas Tribune, the bills’ authors could still be open to adjusting the 2.5 percent rate, and lawmakers indicated the bills would not be ready for a final vote until education funding is addressed separately as well.

Both Bettencourt and Toth said they hope to see a local revenue limit make it through the Legislature as a stepping stone for further action. Toth suggested tying appraisal values to a system like the Consumer Price Index and cutting unfunded mandates for schools and local governments to help curb problems, but maintained that spending responsibility and the proposed cap are the most important first steps to cutting taxes.

“You’ve got to cap before you can cut. So if there is no spending cap, we’ll cut one thing, and it’ll be Whack-A-Mole,” he said. “The first thing you have to do pragmatically, you’ve got to cap what they can spend. And then from there, you can then attack what they take.”

Since SB 2 and HB 2 were filed, lawmakers from around the state have also moved on other pieces of property tax reform. Bills related to all sides of the issue, including adjusted rollback rates, the homestead exemption, the appraisal system and school funding, are all up for deliberation this session. Bettencourt said he is confident some level of tax reform will be enacted this year.

“I think the likelihood is extremely high by special session,” he said. “I am not going anywhere until we get it done.”