Popular soup is the focus of family restaurant 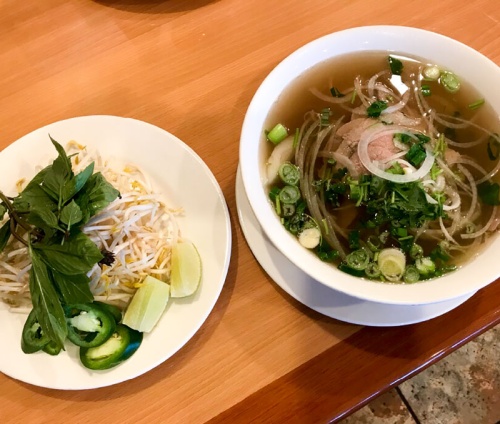 Pho is the eateryu2019s most popular dish.

Twin brothers Steven and Tony Tran opened Pho NB in December 2017 as a way to bring pho to the New Braunfels community.

“We were the first pho restaurant in town,” said Dao Tran, Tony’s wife.

Pho is a Vietnamese noodle soup that has gained popularity in recent years. It is made from beef stock, noodles and thinly sliced meat.

A year after opening the Trans say the restaurant fills with people, especially at lunch time when dishes are prepared and served to customers in a timely manner.

“It’s fresh and healthy, and we really try to have it out as fast as possible,” Dao said.

The Trans—whose families have owned other restaurants in New Braunfels and Houston—have been in the restaurant industry for years, and they said they have always loved it.

At a previous restaurant, the owners said people often asked why pho was not on the menu, and out of that the idea for Pho NB was born.

The broth is made fresh every day from beef bones, and the vegetables are all cut fresh.

Dao said pho is undoubtedly Pho NB’s most popular menu item, but other Vietnamese cuisine is served as well.

The Trans have made the restaurant a family affair. Steven and Tony run the kitchen while their wives, Dao and Kelly, manage the front dining area. They said they love being able to work so closely and spend time together every day, and they all love delighting their customers.

“People come in, and we want to give them the best,” Dao said.