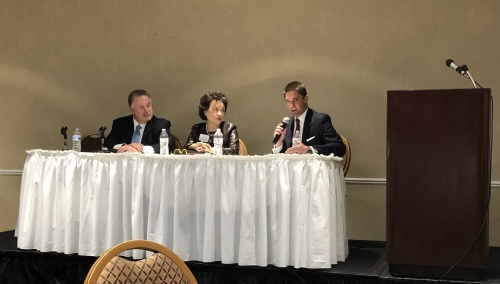 Local representatives from State Legislature gathered Dec. 10 to discuss issues central to Richardson heading into the 86th legislative session, which kicks off at the Capitol next month.

In attendance was state Senator-elect Angela Paxton, R-Plano, who gave a short speech at the beginning of the program, as well as state Rep. Angie Chen Button, R-Richardson, and state Rep. Jeff Leach, R-Plano.

Richardson Chamber of Commerce President Bill Sproull moderated the panel discussion, which began with a recognition of the razor-thin margin by which Republican legislators snagged their victories in November.

"Elections are clarifying moments, and Republicans got a wakeup call last month," Leach said. "We know now which issues are important and which are not."

Among the critical issues discussed at length by the panel were school finance and property tax reform, transportation, use of the Rainy Day Fund and economic development.

Every option is on the table when it comes to resolving the broken school finance system, Leach said.

Districts across Texas are experiencing historic revenue shortfalls as a result of recapture, a state-mandated system that redistributes property tax dollars from districts deemed "property-rich" to those deemed "property-poor."

Richardson ISD has not paid into the state's recapture system since 2009. Still, district trustees and staff members say state funding has declined by $16.1 million since 2013 and is projected to decrease by another $41.8 million between now and 2022. As a result the buck has been passed to local taxpayers. In November RISD voters approved a tax rate increase that upped their maintenance and operations contribution to the maximum allowed by the state.

Leach and Button said they are confident the beleaguered debate over school finance will finally be tabled during the upcoming session.

"There is no question the state needs to put more into public education, and I think we will," Leach said. "The funds are there, and we shouldn't and don't need to raise your taxes or impose a state income tax."

Legislation that ensures adequate funding for statewide and regional transportation projects is one of the top priorities for the city of Richardson and its chamber heading into the session.

With the replacement of U.S. Rep Pete Sessions, R-Dallas, expecting transportation funding from the federal level may be misguided, Button said.

Still, legislators plan to have a conversation about creative ways to allow metropolitan planning organizations, such as the North Central Texas Council of Governments, build projects more quickly and with the backing of state funding, Leach said.


USE OF THE RAINY DAY FUND

The state's rainy day fund balance sits at $12.5 billion, Leach said. Use of the fund is reserved for events that place a strain on the Texas economy, such as Hurricane Harvey.

A two-thirds majority vote is needed to disburse rainy day funds, and Leach and Button said $3 billion will go toward mending the wreckage left behind by Harvey.

With the aim of maintaining a $7.5 billion fund balance, that leaves $2 billion that Leach said could be used to address issues linked to the teacher retirement system, health care or public education.

Maintaining Richardson and North Texas' reputation as hubs for economic development will rest in part on decisions made during the upcoming session, Leach and Button said.

Incentives are a key way that Richardson remains competitive when it comes to corporate expansions, relocations, capital-intensive projects and job growth, according to the chamber. The city and the chamber plan to oppose any legislation that erodes local control or damages the state's business-friendly reputation.

Button serves as the chair of the house Committee on Economic and Small Business Development. With a dwindling Republican majority, Button said she expects some pushback on Republican-backed business practices.

"2019 is going to be a challenging year, so pushing economic development strategies and maintaining our incentives ... all tools in the toolbox are very important," she said.

Success of the session will hinge on the ability of legislators to work across the aisle, Leach and Button said.

"[Bonnen is] a breath of fresh air in terms of leadership," he said. "... He won't get sidetracked by divisive issues."

Straus' relationship with Gov. Greg Abbott and Lt. Gov. Dan Patrick was mired in controversy. The leaders often disagreed on key issues, such as the Bathroom Bill.

"He knows how to play the game and will have a great relationship with the governor and lieutenant governor," she said.

To resist collaboration would hamper bipartisan efforts and lead to the ultimate loss of a Republican majority in state Legislature, Leach said.

"What could derail the session? If any two groups stick their foot in the sand and say, 'This is a hill I'm willing to die on," he said.
SHARE THIS STORY