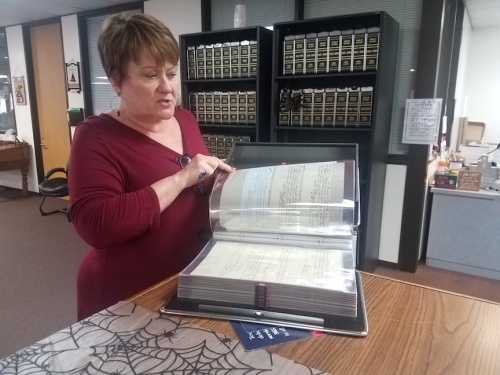 According to Hornseth the community can monitor weather and flooding situations as they are happening as well as access the latest road closure updates when they visit www.cceo.org and look on the right-hand rail. The website also links to forecasts from the National Weather Service.

With recent rain, Hornseth told the court that as of Thursday morning the county’s only impact had been the Rebecca Creek Road Bridge across the Guadalupe River that was flowing at around 20,000 cubic feet per second when the bridge was overtopped with water.

“It didn’t cause any damage,” Hornseth said. “There was some debris, but the road is open again.”

Historic preservation was a running theme at Thursday’s meeting.

The Commissioners Court approved $160,000 in funding for the second phase of a project that will preserve probate record books in the County Clerk’s office.

“These books are a history of Comal County, and I would like to preserve them,” Comal County Clerk Bobbie Koepp told the court.

The first phase, which Koepp said cost more than $300,000, went toward preserving the county’s marriage, birth and death records. The county hired a company called Kofile out of Dallas to place the records inside protective plastic sheets and secure them in fire- and flood-resistant containers.

“I like the work they do just because they’re very meticulous with how they handle the records,” Koepp said. “If somebody calls and needs to look at something they have, they send us a picture of it so we’re still able to service our customers.”

The court also signed off on moving forward with the application of a certified local government subgrant between Comal County and the Texas Historical Commission for federal financial assistance that will go toward the preparation of two Comal County properties for the National Register of Historic Places.

One of the properties is the Pape-Borchers Homestead located at 142 Hueceo Springs Loop Road, New Braunfels. According to supporting documents from the county, the property has historical significance in regard to agricultural patterns and architecture, as it is one of the county’s few remaining properties with structures consisting of cut stone and fachwerk.

A detached kitchen and dining room with a basement are additional rare and unique features, the document states. Also part of the property’s 18 historical resources are four barns, two chicken houses, a granary, cistern, corral, two troughs, a shed, a windmill and fencing.

The property sits on 10 acres of land and is used as a residence by descendants of the Borchers family, who obtained the property in 1901. Previously, it was owned by the Pape family dating back to 1879.

The second property that would benefit from the funding is the Mission Valley School and Teacherage located at 1135 Mission Valley Road in New Braunfels. According to the county, architecture and education give the site historical significance under the National Register’s criterion.

The teacherage, which is one of three that exist in the county, was constructed in 1870 and is used as a residential rental that provides income to the Mission Valley Community Center. The school was constructed in 1884 out of hand-chiseled stone from a nearby quarry and was designated as a Texas Historic Landmark in 2009. It is one of only six remaining one-room schoolhouses that sits on original property in Comal County.

The 2.8 acres of property also features historic playground equipment. According to the county, the complex is the most complete example of a late 19th century free school located in the county.

Comal County is requesting $11,660 in grant funding for the projects, which will be matched by the county. According to the Texas Historical Commission, approximately $90,000 to $120,000 will be available for this round of grants, contingent on the federal budget.

In addition to approving the historical grant the court approved two additional grants to fund positions for a protective order victims assistance coordinator and a crime victim liaison.

The grants are part of an ongoing county initiative to gain funding from outside sources. With the help of Grants Administrator Michele Valadez, who came on board in January, the county has been able to secure hundreds of thousands of dollars of grant funding in 2018.

The next Comal County Commissioners Court regular meeting is scheduled for Oct. 25 at 8:30 a.m. on the second floor of the Comal County Courthouse, 100 N. Seguin Ave., New Braunfels. See what is on the agenda here.