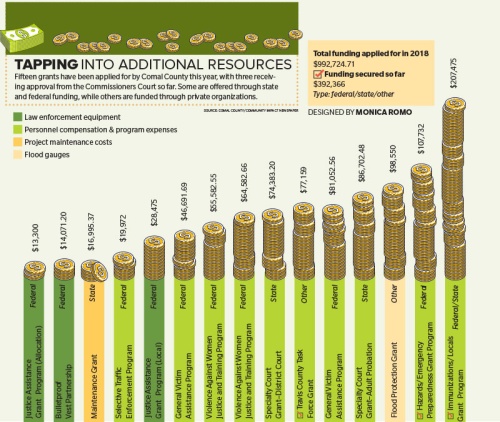 Fifteen grants have been applied for by Comal County this year, with three receiving approval from the Commissioners Court so far. Some are offered through state and federal funding, while others are funded through private organizations.

This year, Comal County hired Michele Valadez to fill its new grants administrator role. She is tasked with finding and applying for grants from federal, state and other entities to help lift some financial burden off the county’s taxpayers.

“The taxpayers’ dollars are only going to go so far, so if there is state and federal funding available we can utilize, it will definitely be a benefit for the community as a whole,” Valadez said.

Valadez’ role also helps relieve some of the workload from department employees who were previously handling grant applications, reporting and other requirements on top of their full-time jobs.

“I think we as a county did a pretty good job of that, but as we received more and more grants and as we continued to grow and had more and more to do, it seemed like it was harder to manage,” Comal County Judge Sherman Krause said.

Valadez hit the ground running in her new position by pursuing the renewal of grants the county was already benefiting from. Since then she has worked to gain an understanding of each department’s needs and said the Comal County Auditor’s Office is working to streamline its budgeting process by forecasting unmet needs three to five years out, which will help identify what types of grants should be pursued.

According to Valadez, the grant application process can be time-consuming, and it can take months to receive a final answer.

“Grants take a while, so you probably will not find out if you’ve received that funding for six, eight, nine months after applying because of the application process,” she said.

Each grant has a different set of criteria that must be satisfied. In addition to submitting an application, some require giving a presentation or attending public meetings.

Even after the county is selected as the recipient of a grant award, accepting the funds must be approved by the Commissioners Court, with the budget usually steering the final decision.

With some grants the county must provide a funding match, so the court must evaluate if its financial situation has changed since the grant was initially applied for. The way the grantor disburses funds also comes into play, with some reimbursing the county after the fact and others providing funding monthly, quarterly or 100 percent up front.

The court may also need to take additional measures to maximize the efficiency of grants. One example of that can be found in a body armor grant for the sheriff’s office the county pursues each year.

“Obviously we have financial reporting when we actually use the money to buy the bullet-resistant vest, but we also … have to have a policy in place that says officers have to wear those vests when they are out on patrol or out on duty,” Krause said.