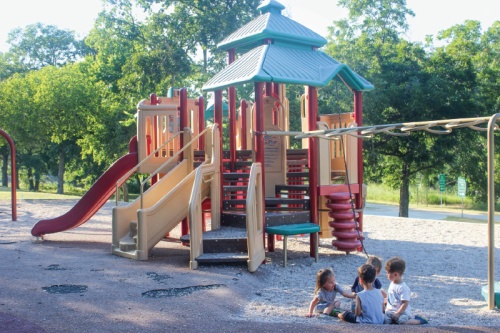 Gracywoods Park received a grant for a new playground from the Austin Parks Foundation in November 2017, and it will be completed in late 2018.

In the month of August, the grass in Alderbrook Pocket Park is yellowed, monarchs will not return to the butterfly garden until they pass through in the fall and wildflowers that dot the 1.9-acre plot of land will not appear until spring.

North Austin residents Vit Kaspar and Jeremiah Bartlett, however, are busy taking soil samples and putting together plans for a community garden that they plan to open with the help of other residents in the Lamplight Village area near MoPac and Parmer Lane.

“We started barely talking about this in October, and now we have a permit already,” Kaspar said. “Hopefully by spring, we’ll have the garden.”

Kaspar and Bartlett are part of a broader network of communities in North and Northwest Austin in which residents are taking park improvements into their own hands.

In 2016, Austin City Council updated the city’s Parkland Dedication Ordinance to state all residents must live within a quarter-mile to a half-mile from a park. To fulfill this goal, the city created a park deficiencies map to highlight areas of the city with the least access to green space. North Austin was identified among the highest areas of need. The department’s goal is to have 24 acres of parkland per 1,000 residents.

Acquiring the land to increase access, however, takes time, resources and community input, said Kim McKnight, a planning division manager with the Austin Parks and Recreation Department. The department stands to gain $149 million in funding with $45 million dedicated to parkland acquisition if the city of Austin’s 2018 bond passes in November.

“The $45 million in parkland acquisition is seen by our department as very critical in order for us to keep up with the needed parkland per capita goals of our city,” McKnight said.

In the meantime, community members in North and Northwest Austin are doing what they can to organize improvements for the parks they already have access to.

“In this particular neighborhood and a few miles around, there is nothing like this [park].” Kaspar said.


Putting in the work

Throughout North and Northwest Austin, parks such as Gracywoods, Balcones District and Great Hills Park are receiving upgrades thanks to area residents’ collaboration with the city and partnering organizations such as the The Austin Parks Foundation, a nonprofit that provides grants for community-led projects.

At Gracywoods Park, neighborhood resident Frannie Sanchez said she noticed she was frequently tripping over multiple sections of worn-out surfacing below the playscape while playing with her children. When two swings fell off their chains, she said she began to wonder if any city officials knew of the park’s state of disrepair.

“I was tripping and falling over this really treacherous fall surface and that was the experience of many of the parents out here,” Frannie Sanchez said.

The parks department performs assessments of parks and facilities throughout Austin and prioritizes improvements based on level of need, McKnight said.

“[Improvements are] also put through an equity lens,” she said. “If we know that replacing a playground, for example, in one given area would improve more health indicators or have more of an impact on some other indicator, we would choose that particular location.”

To expedite the process, McKnight said she recommends residents contact the parks department to draw attention to areas of need.

If the project is not already in a planning stage within the parks department’s budget, park officials can coordinate with partnering organizations, including The Austin Parks Foundation, which receives a large amount of funding from Austin City Limits Music Festival ticket and vendor revenue, McKnight said. Neighborhood groups can apply for grants of various amounts through the city’s Neighborhood Partnering Program and through The Austin Parks Foundation grant program.

If a group cannot complete the sometimes time-intensive grant process, McKnight said the parks department takes that into consideration when prioritizing projects.

“In some cases there are entities that cannot afford or do not have the capability of getting a grant,” she said. “If we know that the conditions, based on our assessment of that particular park, need improvements, we’re going to move forward with that as a priority.”

Organizations throughout Austin that partner with people interested in improving and preserving parkland, such as The Shoal Creek Conservancy, Friends of the Parks of Austin, Travis Audubon Society and others, supplement the parks department’s budget and resources.

At Great Hills Park in Northwest Austin, resident Marie Laing said she has spearheaded several projects since the early 1990s, including its current grant application for a new playscape. Most of the projects would never have been completed without help from community volunteers, Laing said.

“If you work on something, when it’s finished you feel ownership of it and you’re going to try to maintain it and be concerned about it,” she said. “The city has many parks and only so much money, so they can’t do all these extra improvements and have enough personnel to maintain or repair everything. If you don’t do these things nobody is going to do it.”


The need for green

“It provides space for learning outside where it is safe and students can enjoy nature and learn from what they’re seeing,” she said.

Many organizations involved in improving access to park space focus on the physical and mental health benefits associated with spending time outdoors. Jennifer Bristol, a coordinator for Texas Parks and Wildlife Department who works with the Connecting Children in Nature program, said increasing park access should be seen as a way to improve public health outcomes.

“Having access to parks where people can play and participate in sports and where they can walk, run and do things that don’t require expensive gear or a membership really helps promote equity and healthy living choices,” Bristol said.

Frannie Sanchez said she sees Gracywoods Park as a place to increase a feeling of community among residents of many backgrounds.

“Our park is pretty special in that even today I’ve heard three languages so far being spoken here,” she said. “It’s a really neat, diverse little corner of Austin where you can hear and play in three or four different languages.”

At Alderbrook Pocket Park, Kaspar said he hopes access to gardening demonstrations will promote healthy habits among his neighbors.

“The main goal for us is to be a community garden and a demonstration garden so you can show people what’s in season and how to grow it,” Kaspar said. “We will be having regular free gardening classes every Saturday during the season with a relevant topic for the season.”

“People [surveyed in Austin] wanted more programming, especially fitness, nutrition and education programming,” Harrell said. “They felt like there was a huge vacuum in available programming and services in the nutrition and physical activity realm and for all ages and all abilities.”

Gilma Sanchez said the Barrington park is open to the public in the evenings and on weekends, and she hopes to continue to make parents and community members aware of its accessibility.

“We’re letting the families know what this is for and that it’s not just Monday through Friday access,” she said. “It’s for them to use, and that’s something that we will continue to focus on this year with our families.”

Kaspar and Bartlett said they and other members of the Alderbrook park’s organization hope hosting events, seed giveaways and gardening classes will engage members of the neighborhood.

“I live in an apartment so I don’t have access to a yard to grow things myself,” Bartlett said. “I feel like this is a good thing to contribute back to the community.”
SHARE THIS STORY