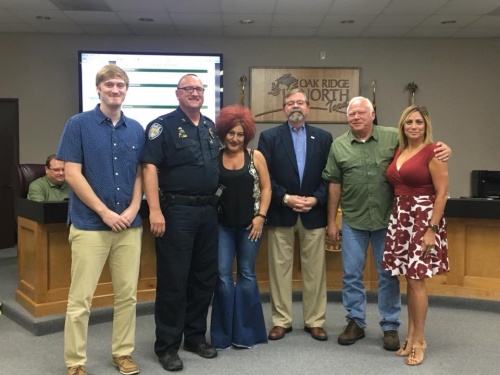 City Manager Vicky Rudy said that council members accept Walters' retirement and approve Libby as the new police chief-elect, the transition process will begin so that Libby will take on his new role in December when Walters retires.

"Tom Libby will be named chief-elect in order for us to start the transition process with Andy to settle what’s going to happen when he retires," Rudy said. "It will also give Tom a chance to do that transition and start to take some responsibilities for the department. The actual promotion to chief will be in December when Andy leaves."

Walters announced through the city’s Facebook page July 30 that he will be retiring at the end of this year.

At last night's meeting Walters thanked city council members for the experience he had as the police chief for the city.

"I just want to thank you all for all the years you’ve given us, I couldn’t have asked for a better place to work or better friends to be around," he said.

Libby also thanked council members for their support and Walters for the opportunity.

"I want to thank you all for the support and I couldn’t be where I’m at if not for the chief and city members, residents and fellow officers who are here," Libby said. "It’s what I’ve been working towards for the past 25 years. I’m more than wiling and ready to pick up the pack from Andy and continue to march and serve you all well."