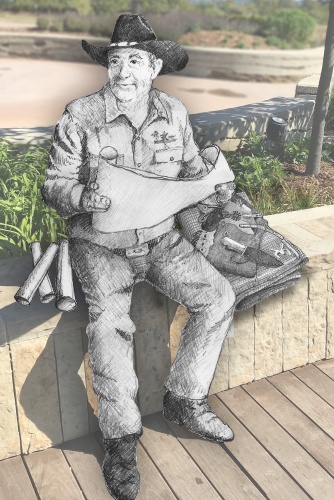 David Iles will create a bronze sculpture of Wayne Ferguson.

At the July 2 City Council meeting members approved a contract in the amount of $90,000 for creation and installation of a bronze sculpture of Wayne Ferguson in Wayne Ferguson Plaza.

Council also approved a $50,000 donation that will be used for the project. The city’s funding will come from its hotel occupancy tax.

Sanger artist David IIles was recruited by the Ferguson family for this project.

The project is expected to take nine to 12 months with a public dedication at ColorPalooza 2019. The sculpture will depict Ferguson seated on the wall along the boardwalk, under the shade of a redbud tree, about 50 feet from the gateway off Charles Street. He will be wearing his favorite boots and hat while looking at a map of the plaza.