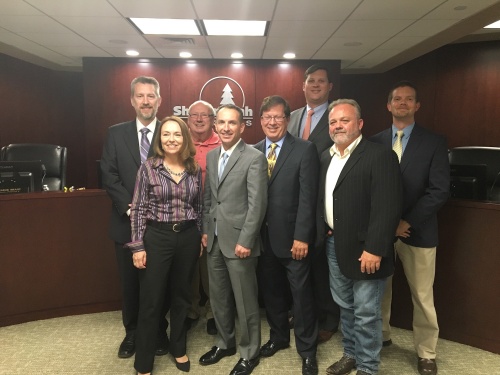 Reyer served as Shenandoah city secretary for six years prior to serving as interim city administrator for seven months, following Smith’s resignation. Reyer then resigned from her position in March to take a director position with the city of Bastrop.

“Just to be clear, nothing happened in Bastrop that made me run back [to Shenandoah],” Reyer said. “In fact, it’s all gone great—I love Austin. But I wasn’t gone very long before I had a tremendous outreach from [Shenandoah] staff asking me to reapply and it just seemed to build momentum as the weeks went by. The support was overwhelming.”

Reyer, who was a finalist in the city’s search for a city administrator prior to her resignation, said she opted to resubmit her application. The council unanimously extended an employment offer to Reyer on May 9.

“In those seven months that I served as interim city administrator, there were a lot of challenges, no doubt, but I realized that in the end the team that we became in those seven months was just phenomenal and the work that we did together—[Shenandoah] just became a different place for the better and I missed that.”

Reyer’s employment will become effective June 1. As outlined in the contract, Reyer’s annual salary will be $135,000—a figure which was recommended to council by a consultant, Council Member Ron Raymaker said.

“I want to say thank you to Joseph—you have stepped up in a huge way, your family has stepped up in a huge way and I know tonight was a big relief for you because we approved a contract for a city administrator,” Mayor Ritch Wheeler said. “Thank you for being willing to help get us through this time period and the very, very minor amount of additional increased pay that you asked for didn’t even come close to the amount of work you put in—it did not go unnoticed.”

“I [want to] congratulate Kathie—welcome back,” Council Member Mike McLeod said. “I know we’re all super happy, the employees are super happy and the residents are super happy. We’re all very glad to have you back."

Reyer said her biggest priority upon her return will be working on the city’s budget for the 2018-19 fiscal year.

“I had a baptism by fire as interim city administrator but I learned a lot and I think it brought out some strengths that I didn’t know I had,” Reyer said. “Like I said when I left, I was proud of the work we did and I still am and I just see that there’s so much more that we can do.”