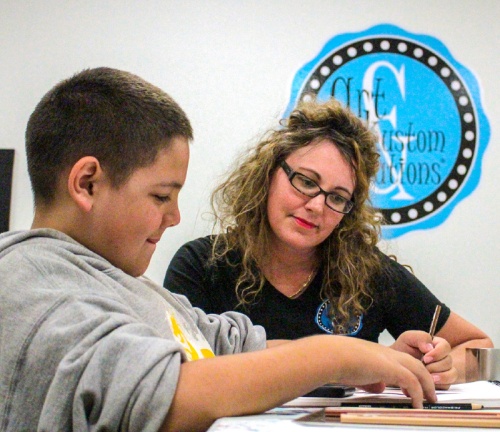 Perhaps one of Pearland’s most Instagram-worthy murals is the handiwork of the team at Art & Kustom Kreations, founded by Kelly Kronfield.

After running the business out of her home in Pearland for three years, Kronfield opened the studio in 2016, just in time to offer summer camps. Before that, the business hosted paint parties and corporate events, but as a former educator, Kronfield had bigger plans.

“My vision, my dream was to have an art studio where I could have people come in, do art, have a gallery,” Kronfield said. “We’re a teaching studio. That’s what we want to be known for.”

As the business has grown, she has been able to hire artists who have added new strengths to the classes and have added to its palette of services. One big win was recruiting muralist Chris Garcia, Kronfield said, which has led to collaborations with The Sugared Pear Boutique—for the Pearland mural—Kid ‘N’ Play, Nacho Nachos and The Drink Station, as well as several schools.

“We’re a team. I don’t see my team as working for me. We work together,” Kronfield said.

The studio has a growing after-school art program, with classes now at five Houston ISD schools. The next step for Kronfield is to set up after-school programs at schools in Alvin and Pearland ISDs.

“We’ve had so many parents come up to us and ask, ‘When are you coming to the schools?’ … So we’re working on that,” she said.

Its summer camp program, which has more than tripled in enrollment since 2016, is another big area of growth, she said.

On top of growing the business, Kronfield runs a nonprofit, the Foundation for Creative Leadership, that works with Communities in Schools to set up after-school art programs and help develop local artists.

Kronfield would also like to participate in larger, community-driven collaborative events around art, which Pearland needs, she said.

“What I want is to promote art and leadership,” she said. “My goal with that is to support artists. … People want art but they don’t want to pay for it. There’s a piece that’s missing.”